From 1910 to 1945, Reuben’s claim that the deli had gone “[f]rom a sandwich to a national institution,” rang true (Reuben’s Menu Cover). During the early years of the Jewish delicatessen in NYC, the eatery provided the first social place for Jewish Americans to forge a community that was not strictly religious. For the first time, Jews of different religious sects and ethnic origins shared a common space around cuisine. As the decades progressed through the roaring 20’s and the Great Depression, the deli reached its peak popularity as their “showbiz” atmosphere emphasized the growing importance Jewish Americans had in NYC culture. The assimilation that came with the deli’s evolution and growing popularity created a new Jewish American identity in NYC where Jews had a sense of cultural tradition in a more secular sense that thrived throughout the 1920s and 30s. In the end, the deli became a victim of its own success, as the drastically increased economic success and mainstream importance it gave the Jewish community caused them to look elsewhere, as they associated delis with the lower class era before their social class rise. Nevertheless, the impact of the Jewish deli is clear: the identity that developed among Jewish Americans in NYC evolved with the deli’s introduction, rise to popularity, and eventual decline. 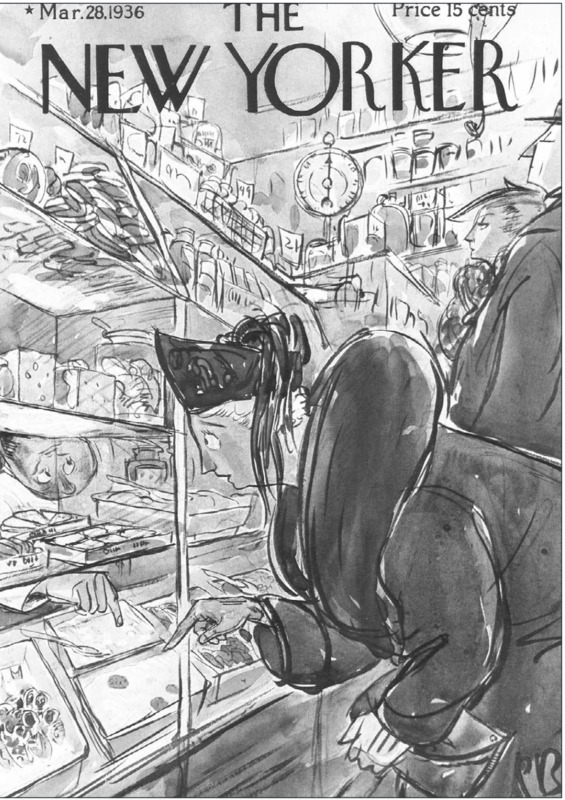 Cover of The New Yorker

The portrayal of gender roles within the new Jewish American identity that emerged out of NYC delis was both changing and stagnant. With the introduction of the delicatessen in the early years of the 1900s, the restaurant’s role as a “third place” for Jewish Americans in NYC made them a male dominated space. The deli’s original market was for the single male Jewish immigrant who lacked a wife to prepare his meals. The deli’s offerings of red meat reinforced masculinity which made the entire place, including service, a male dominated atmosphere.

As the deli’s popularity skyrocketed throughout the 1920s and 30s, the role of the deli’s owners, cooks, and servers remained stagnant. Even as Jewish American women gained more social freedoms with the secularization of Jewish values and changing societal norms, the role of the Jewish women as absent from social spaces unless appearing as a wife or mother remained the same. While Jewish American identity became entrenched with NYC mainstream culture, the unchanging nature of broader American gender trends, as Parkin points out, might have contributed to this portrayal of the Jewish woman. However, the appearance of women themselves changed with the success of the delis. Even as people struggled throughout the thick of the Great Depression, women were illustrated with a thicker build, signalling the wealth of the Jewish community and the wife’s ability to feed herself and her family. The overall desire to associate Jewish ideals with success guided the change in this representation of Jewish women.

The appearance of Jewish women changes once again as the depression and World War II come to an end. Being introduced to new foods at home and abroad, the Jewish community moves on from the delicatessen and its association with lower class. Thus, the portrayal of both men and women changed to a more elegant and upscale version. Women appeared slimmer and adorned fancy attire and accessories, and men appeared in suits with broad shoulders. Even so, the persistence of male service held strong in this elegant setting. 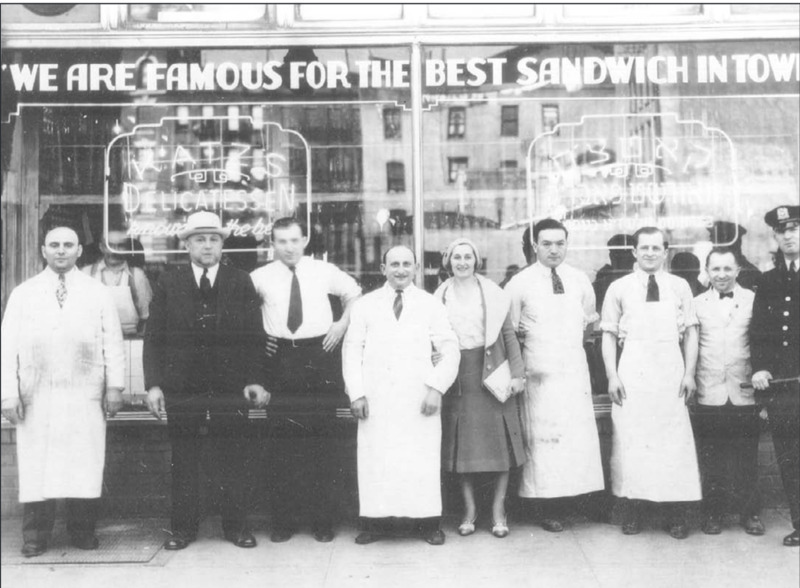 While the gender roles in the Jewish American identity that emerged from the delicatessen in NYC remained stagnant to a certain extent, the depiction of class roles changed drastically. The first delis that appeared on the streets of Manhattan remained very basic in structure and maintained overtly Jewish cultural symbols like Hebrew writing and strict kosher laws. This simple and blatantly Jewish representation revealed a strong connection to traditional roots, as they persisted in a time where Jews were stereotyped as uncivilized.

With the roaring 20’s, the depiction of Jewish class changed drastically as Jews felt a larger importance due to their presence in the entertainment industry. Suddenly, NYC Jews were depicted as flashy and high class individuals associated with the fame and fortune of Hollywood. Images of famous actors, modern structural designs, and large lights propelled the Jewish deli and the Jewish community from an obscure nuisance to an element of NYC culture. Even as the depression loomed a dark cloud over NYC, Jewish delis illustrated Jews as successful achievers of the American Dream. Images depicted Jews as economically successful and vital contributors to NYC and American culture.

Even as the popularity of the Jewish deli began to decline in the 1940s, representation of Jewish class remained upscale. However, this higher class status shifted from entertainment to elegance. Jews traded loud, boisterous, and flashy, for a more quiet version of economic luxury.