A History of Maps of the Lehigh Valley 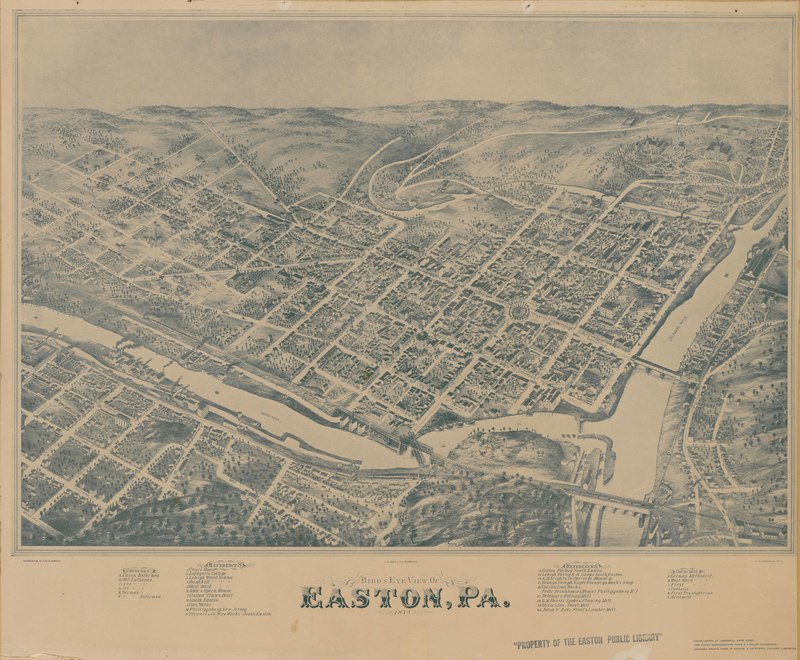 Let us acknowledge at the outset that the land we are referring to in this collection belonged to Native American people long before the arrival of Europeans. They had their own sophisticated means of understanding their locations and finding their way through their landscapes. Transmission of this knowledge was often through oral traditions rather than through graphical materials, although some maps produced by Native Americans on various physical media also exist. And so, although this map collection displays the cartographic traditions of European settlers, we should remember that this region we call the Lehigh Valley was the homeland to multiple Native American tribes and nations before European contact, including the Lenape (now known as the Delaware Nation).

The earliest colonial maps to offer glimpses of the region are small-scale* and are mostly focused on the known parts of Pennsylvania.  Given that colonial settlement to the north of Bucks County did not gather much momentum until the middle of the eighteenth century, there is not much cartographic detail covering the geography of the region until the period of the early republic beginning about 1790. Exceptions to this are cadastral maps which record surveys of private property and became increasingly numerous as settlers lay formal legal claims to land beginning about the 1740s. A particularly rich set of these maps were produced by highly skilled Moravian surveyors who illustrated their cadastral maps in an elaborate and colorful style that sets them apart from common surveying records elsewhere in North America.

As was true in all regions of the eastern United States, it was mostly private commercial mapping efforts which dominated cartographic production for most of the nineteenth century.  These maps, often paid for by subscription, included commercial wall maps and county atlases. In the Lehigh Valley, these began appearing in the mid-1800s and provide snapshots of historical landscapes at larger scales, through the latter part of the century. In addition to these commercially generated maps of general interest, there was also a good deal of mapping done by and for industry, including canal, railroad, and coal mining interests. These include smaller scale maps as well as large-scale engineering diagrams of various industrial and transportation sites.

Another set of maps driven by the need for business information are the large-scale fire insurance and real estate plat maps which first appeared in the largest U.S. cities just before the Civil War. These include the Sanborn Map Company's fire insurance maps as well as similar large-scale map products by rival firms such as G. M. Hopkins & Company. The Sanborn Map Company began producing maps of the Lehigh Valley in 1885, and the first municipal sets of these maps for Allentown, Bangor, Bath, Bethlehem, and Easton all date to that year.

Government did fund some map production in our area through most of the nineteenth century, although it was minimal at first.  The earliest such initiatives were a combination of public and private subscription. By using state funds to support these subscription efforts the legislature was able to subsidize and jump-start efforts in a way that private subscriptions only succeeded at later in the century. With the legislature committing to purchase hundreds of maps and paying for them before they appeared, map makers were able to forge ahead with the expensive and time consuming business of surveying without running out of funds in the middle of a project that often took several years to complete.  One such early public mapping effort resulted in the series of county and state maps produced by Melish & Whiteside from 1816 to 1821.  Later in the nineteenth century maps produced directly by state and federal agencies began to provide coverage in our area. These include the Pennsylvania Geological Surveys beginning in the 1830s and the United State Geological Survey's topographic quadrangles, the earliest of which first appeared in the late 1880s.

Another genre of maps popular in the nineteenth century are panoramic and bird's-eye view maps. These were also speculative commercial ventures, funded through subscriptions, which captured town and city views from a perspective high above. And, although these oblique-angled images cannot be translated digitally into vertical map views for comparison to maps of other time periods, they are remarkably accurate portrayals of cityscapes, right down to the detail of individual buildings, and are valuable historical sources in their own right.

By the twentieth century, the types and sources of maps became too numerous to describe in detail in this brief essay. However, it should be noted that aerial photography of the region begins in the 1920s and that both oblique and vertical views were created. In the 1930s, as a part of New Deal efforts to combat soil erosion, the United States Department of Agriculture began a nationwide program of aerial photo surveys that provide comprehensive coverage of the entire contiguous United States. Coverage in Pennsylvania began in the late 1930s and was completed by 1942. Many maps of our area created from the 1930s onward benefited from the accuracy achieved by map-makers working directly from aerial photos.

*The term small-scale map refers to those maps with smaller scale ratios - where the map view could be considered "zoomed-out," thus covering a greater area of land with less detail. Conversely, a large-scale map is "zoomed-in," showing a smaller area of land, but with greater detail.

Further Reading: Some important histories of North American cartography inform this essay and are a good place to begin learning more about these subjects. American Maps and Mapmakers by Walter Ristow (Detroit: Wayne State U. Press, 1985) is a comprehensive history of commercial map making in the nineteenth century by a former chief of the Geography & Map Division at the Library of Congress.

A brief introduction to panoramic maps and birds-eye views may be found online at the Library of Congress, excerpted from John R. Hébert and Patrick E. Dempsey, Panoramic Maps of Cities in the United States and Canada. Readers interested in a deeper exploration of this fascinating genre should consult John Reps, Views and Viewmakers of Urban America (Columbia, Mo., U of Missouri Press, 1984).

For a nearly complete digital collection of fire-insurance maps of Pennsylvania, including the cities and larger towns in our area, see the Penn State Libraries Sanborn Fire Insurance Maps Collection. A good introduction to Fire Insurance mapping may also be found online at the Library of Congress.

Finally, an encyclopedic treatment of the subject may be found in the multi-volume History of Cartography series published by the University of Chicago Press. Volumes 1-3 and 6 are freely available online. Volume 4 has just been published, and Volume 5 is forthcoming. Ask a local librarian about access to physical copies of these volumes.