The goal of this project is not only to explore the impacts of the Khmer Rouge on Classical Dance but also to understand how the younger generation views the use of the art form in a pop culture setting. In order to understand the reactions from younger generation Cambodians towards this occurrence, I studied their reactions using Digital Humanities methods. The reactions would be used to compare to how Cambodians who were born before Khmer Rouge view the dance, as I have explained in my previous pages.

Since the inclusion of Khmer Classical Dance in popular music is a new phenomenon that is on the rise, there are still a limited number of music videos that can be studied. Therefore, I decided to search and use as many as I could find. The main criteria for the selection fo the music videos were that 1) it is posted on Youtube and 2) movements and costumes of the dancers.

It is posted on Youtube. In Cambodia currently, the main social media platforms that are very popular are Facebook and Youtube. Although some music videos are posted on Facebook, there are videos that are available only on Youtube, and almost all videos posted on Facebook have a link that is connected to Youtube. Therefore, in order to avoid double counting and confusion, comments from Youtube were extracted to be used as my main dataset.

Movement and costumes of the dance. Cambodia has many types of dances such as traditional (Classical and Folk Dance) or non-traditional (Cha-cha-cha and popular dance etc.) However, unlike other forms of Cambodian dances like folk dance, Classical Dance not only have specific movements but also easily recognized music and costumes, which makes it easy to differentiate it from other types of dances. Therefore, the dancers would have to be fully clothed in Classical Dance costume and showed movements that are identical or very similar to Classical Dance movements for it to be counted as Classical Dance. Since some Classical Dances are in the form of a dance-drama, where dancers wear masks in addition to the costumes, the music video that they perform would also be counted on the list.

Identity of the singer. The singer would have to have used Classical Dance in one (or more) of their music videos. It does not matter the time period of when they had made the videos. Gender, nationality, and genre of the song also do not matter. In order to avoid double-counting, some videos are only in the form of a live performance while others are in the form of pre-recorded production.

The data selection process left me with 23 videos of pop music that include Khmer Classical Dance and 20 videos of normal pop music videos made by the same singers. Therefore, the total number of music videos in my study is 43.

Youtube comments in the dataset consist of English, Khmer, and another type of writing similar to Japanese romaji, where the Latin alphabet is used but the words are pronounced in Khmer. Due to technical difficulties, studying the Khmer Language was beyond my ability and time that was available. Therefore, Khmer Language was entirely filtered out, which leaves only the English and Latin alphabet. It is within our assumption that given the demographic of Cambodia, English is mainly used by younger generations, which aligns with the purpose of the study.  The tool used in doing all of these was r programing language.

First, after the comments are extracted from Youtube through r. Then sentiment analysis was used to compare reactions towards videos that contain classical dance and normal music videos. This is beneficial to the project, for it shows how much more or less the commenters like the videos when comparing the two types together.

Second, topic modeling was also used to run fifteen topics to see the overall tone of the comments. Fifteen topics seem the most appropriate after running the model a few times with a different number of topics. It seems that running 10 topics resulted in too narrow categories while running more than 15 gave too broad categories due to noises from the Latin alphabet. After that, I proceed to choose a topic that I think is relevant and study its distribution, where I compare the distribution between music videos with classical dance and music videos without classical dance. 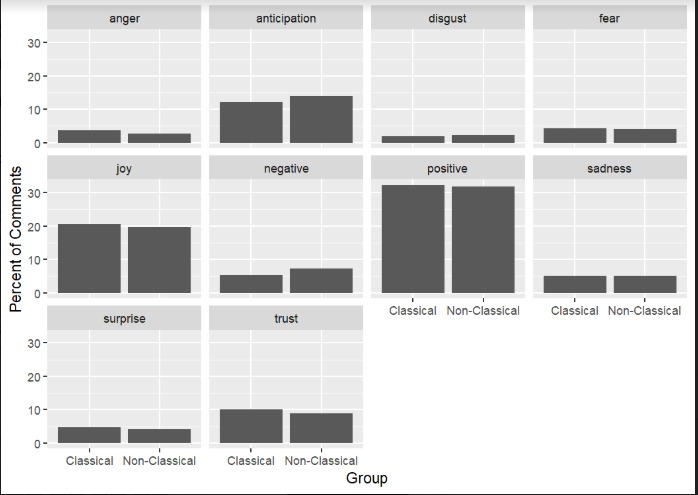 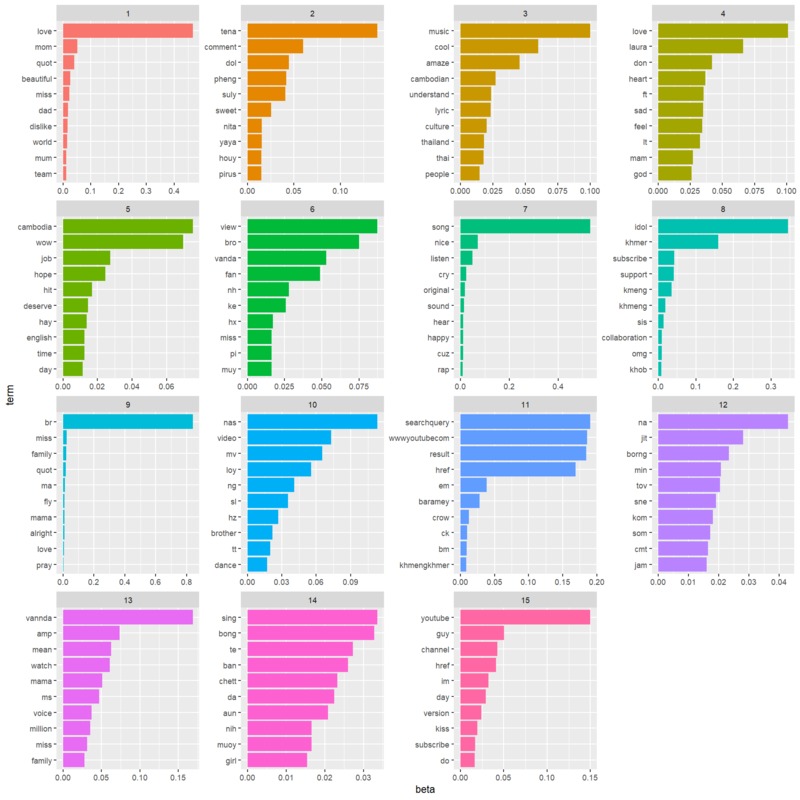 The graph above showed 15 topics in topic modeling. A combination of English and Latin Alphabet can be seen mixing in all of the topics. Some of the Latin Alphabet that formed Khmer words are able to stand alone and have meanings while others seem to be random, making it difficult to figure out the context that was used. Since about half of the videos contain Classical Dances and given its historical context, we would expect to see more words that are in relation to royal, monarch, sacred, ritual, belief or religion...etc. However, the topics in the graph above did not contain such words nor cover such topics, except topic 11 which has the word Baramey which translates to power or guardian spirit. However, the group is too random, and when a Boxplot was run, there was no difference between the two groups. Therefore, I chose to study two other groups, which are group 1 and group 3, whose sub-topics seems to make the most sense. 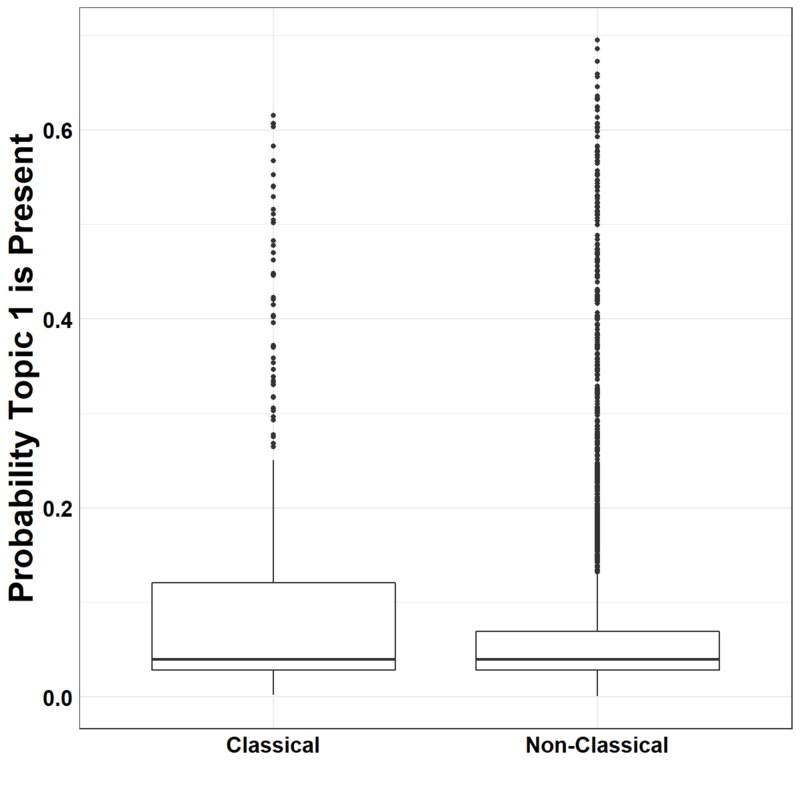 Topic 1 contains words such as love, mum, quot, beautiful, miss, dad...etc, where a big proportion goes to the word love followed by mum, quot, and beautiful. It can be seen that although the median of the two groups is approximately the same, the upper quartile of the Classical group is much higher than the Non-Classical group's. This suggests that the probability of those words appearing in the Classical group is higher than the non-classical group. The words that it contains seem to suggest a connection to parents or people of the older generation through the mentions of words such as mum, dad, and miss. This aligns with the idea mentioned in previous pages that Cambodians born before Khmer Rouge tend to view Classical Dance as not only the epitome of Khmer but also as a connection to the past. 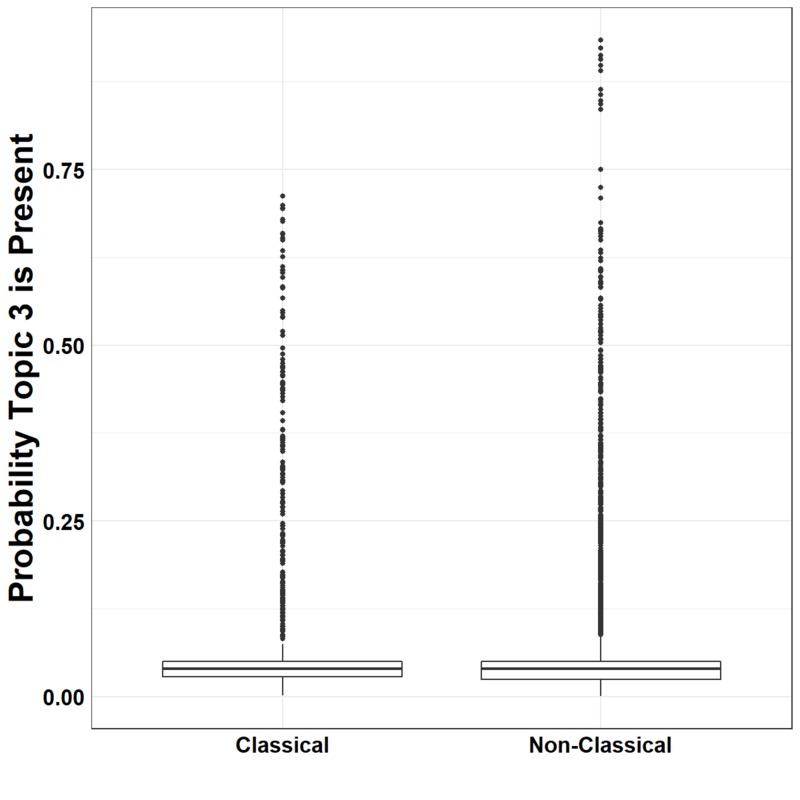 Topic 3 contain words such as music, cool, amaze, Cambodian, culture...etc, where a big proportion goes to the word music followed by cool, amaze, and Cambodian. It can be seen that the median of the two groups is approximately the same, and there is not much difference in the upper and lower quartile of the two groups. This suggests that the probability of those words appearing in the Classical group is approximately the same as the Non-Classical group. This supports the notion that younger generation Cambodians tend to view Classical Dance in approximately the same way they would view normal pop music and entertainment.