1940s: The Decline of the Jewish Deli

During the interwar period, Jewish delis thrived as they consolidated their hold on Jewish identity in NYC and transformed it into something that could be preserved as part of a regional culture. However, a combination of the deli’s own economic success and the events of World War II led to the demise of the popularity and influence of the NYC deli in the 1940s. During the early years of the war, meat rationing at home and abroad exposed Jews to different types of food that would not be served in a delicatessen. Following the war, the economic success that Jews had gained from the era of the delis made associating with a lower class eatery undesirable as they sought to join the middle and wealthy classes toward the middle of the 20th century. An examination of a menu cover from 1945 reveals the result of these circumstances 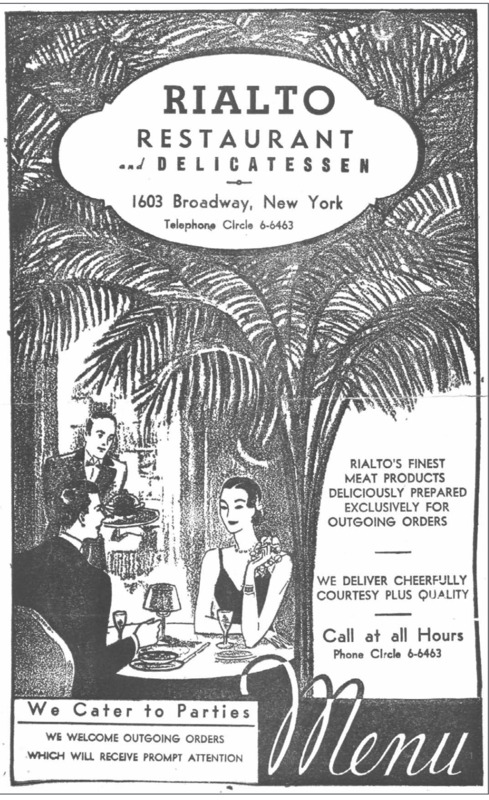 This image is a menu from Rialto Restaurant and Delicatessen from 1945. The cover depicts a wealthy clientele including a woman with a nice dress and jewelry and a man who is presumably her husband dressed just as nicely in a suit. The table is adorned with modern glasses and silverware with a decorative centerpiece and keeping with the trend of male service, the waiter is a man dressed in a tuxedo, allowing the deli itself to represent wealth and social prosperity. At this point World War II is almost over and the depression is long past, and many American Jews began to prosper economically, allowing them to contribute to an American economy and enjoy New York City luxuries. However, in contrast to the upscale interior that this drawing depicts, Rialto’s deli did not have such luxury facilities in 1945 (Merwin 64). While the waiter might be dressed in a tuxedo, the silverware and decor of delis in the 1940s were much more modest in actuality. The misleading depiction here is likely a result of Jews wanting to shift away from their association with delis as World War II came to an end. While delis of the 1920s and 30s put the Jewish community on the map in NYC and spurred economic success, this very same success caused Jews to look elsewhere rather than remain associated with what they considered a lower class profession in the food industry.

The reference to gender in this Jewish identity differs slightly in this image. While a heterosexual couple is depicted, the only consumer facing the reader is a women, whose white skin contrasts against the dark shading of the menu. Unlike the more maternal, thicker build of the woman from the New Yorker cover, this woman is slightly sexualized and alluring. Her figure is slim and her gaze is not trained on any actual food. This could be a result of targeting younger, more wealthy populations or even food rations of the second world war. Nonetheless, it represents a shift in the way the Jewish American identity portrayed women.