Tea had been fairly well established in American culture in the early 1900s, where cultural evidence suggests that, tea had become closely imbricated in the everyday, almost unseen through its common familiarity (Ellis, 251). As time progressed throughout the 20th Century, tea continued to rise in popularity and advertisers were looking to continue the growth of their product. With this largely female demographic, tea advertising turned to a new strategy in order to promote their product. Throughout the mid to late 1900s, tea manufacturers and advertisers developed and marketed tea with a health-conscious approach, selling diet or low-calorie tea drinks. Marketers have used a “healthy lifestyle” approach to capitalize on the “aura” surrounding tea and its consumers (Martin, 167). Low calorie tea was heavily advertised for its lack of sugars or sweeteners while still retaining the “refreshing goodness” of iced tea. Lipton specifically had a common advertising theme of “only two calories per glass.” Appealing to an increasingly health-conscious consumer, many major bottling companies have added both black and green tea or tea blends to the products they offer. Although the "goodies" found in tea, such as polyphenols and antioxidants, are greatly reduced in bottled tea, as compared to freshly brewed tea, these ready-to-drink teas are still much better for you than soft drinks (Martin, 168). 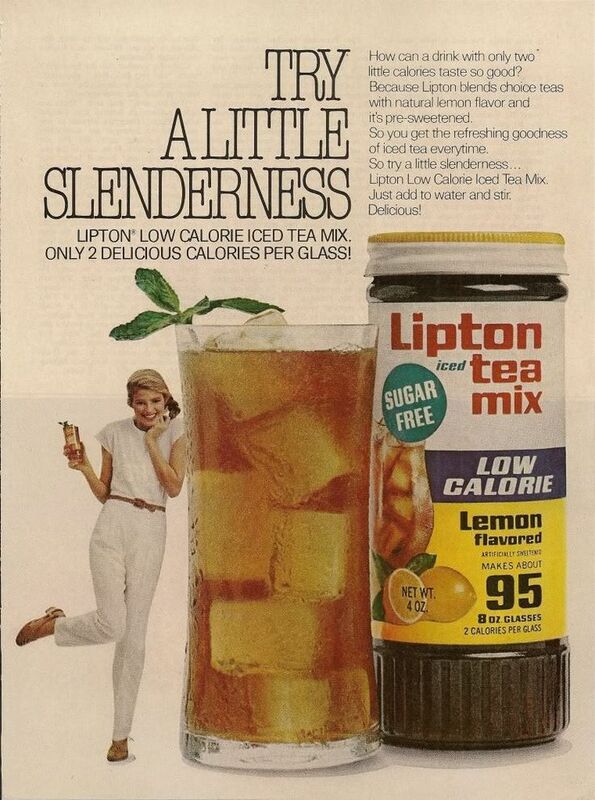 While portraying this “healthy aura” surrounding tea, tea advertisers aimed to promote their products to their specific demographic, and created advertisements directly involving this notion of health and diet within women’s culture. Tea was already a large part of feminine culture, and advertisers combined the health aspects of tea with societal views to further their female demographic. In doing so, many tea advertisements seemed to portray an unrealistic female body image to joust their consumers. The average American encounters 3,000 advertisements every day, and spends a total of two years watching TV commercials in their lifetime. At the center of many of these ads is an image of idealized female beauty. Models are tall, slim, and light skinned, and altered to ever-more unrealistic proportions (Roeder). This is apparent in many of these Lipton advertisements in from the 1980s. In both advertisements, the models are exactly that – tall, slim, light-skinned women dressed in all white. It is fairly expected for these companies to advertise health benefits as they are promoting sugar free iced tea, but these seem to put an unusually heavy emphasis on the image, size, and sexualization of the female body. “Women and girls compare themselves to these images every day, and failure to live up to them is inevitable because they are based on a flawlessness that doesn’t exist” (Roeder). These advertisers use specific themes of preying on an audience's insecurities to sell their products. Drinking iced tea is not the sole reason that these cookie cutter models look the way they do, yet tea advertisers use these ideas to promote their product to a largely female audience. This projection of the female body within these advertisements and the growth of the tea industry in America has led us to a shift in tea advertising within the 80’s and 90’s. 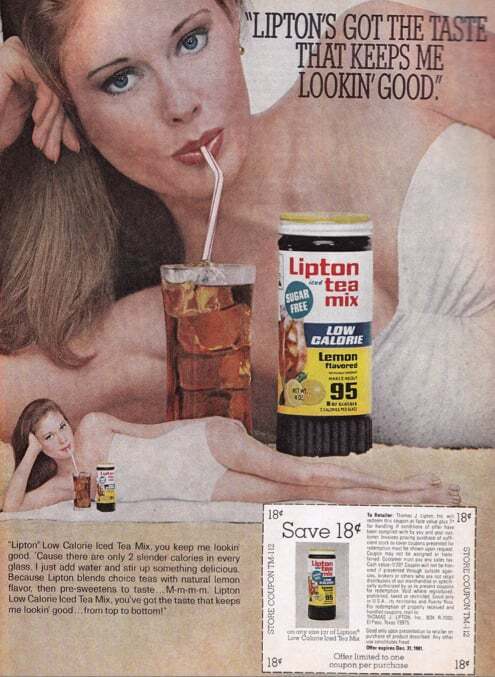