The Impact of Exploitation 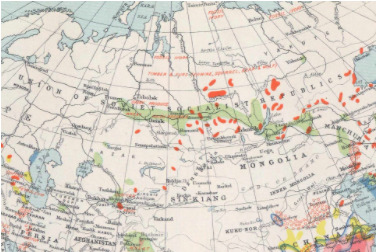 An Atlas of Economic Geography.

This map produced by John Bartholomew and Lyde in the Atlas of economic geography shows the region of Asia and its economic profitability in a number of commodities but in my focus it shows the economic location and value of Tea. While it is a more modern source of information, post British East India Company, it nevertheless shows how much of an influence that the company played in shifting tea from mainland China toward the northern areas of India.(Pickersgill) This map source shows the overarching sentiment of colonialism as the geography is emphasized as economic and the region that the British East India Company controlled in India is still seen as rich in Tea products and production. This helps answer the question of how the perception of the tea trade was manipulated to benefit the private companies that helped keep the status quo. By examining a source almost 50 years after the nationalization of the company, all pretense is lost of maintaining a polite and ethical society in India (Anderson) and see that it was truly just a cash grab by the British East India Company. (Pickersgill)  The impact of this exploitation had major consequneces throughout the later 19th century and heavily influenced the successful independence movement founded later in the mid-20th century.

The study of The British East India Company and its relation to Tea in India is an important viewpoint to  truly understand the depths of colonial exploitation.  However, by studying this from sources created during this time period we can see a huge disparity between what was portrayed as "civilizing" by the British and what actuall occured, a bloody, messy takeover by a foriegn force for the ultimate goal of profit.  My research is important as it takes a critical look at how there was a large disparity between what British sources portrayed and what was the truth of their occupation and rule for nearly 200 years. By looking criticially at this research, we can incorporate it into other depictions of colonialism and determnine if this was the truth or was it propoganda to enforce a western supremecy.