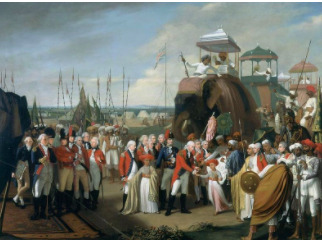 Lord Cornwallis received the sons of Tipu Sultan as hostages after the Third Anglo-Mysore War, 1793.

This painting was produced by Johan Zoffany, a German-born but British artist that was chartered to paint in India at the time of the British East India Company. In this painting the image describes the surrender of the Tipu, The 2nd Anglo-Mysore ended in a British defeat an event that shocked the public back in Britain as stories of the Myrose treatment of British prisoners, captivity narratives detailing enforced circumcisions, conversions to Islam, and cross-dressing for the amusement of Mysore's court (McPhee). This outrage led to stricter laws banning religious fanaticism being placed and eventually even led to the Tipu surrendering sons as hostages to the British East India Company representative that also was a high-ranking member of the British government. We can see a large group of people taking part in this event, and even though the natives are painted with more of an exotic exaggeration for a battle, the image shows almost no conflict or controversy during it (Home). This is one of the first instances of British colonialism being a neat and tidy affair with no real conflict or struggle in its subjugation almost as if the natives were made to be subservient. It also highlights the prevalence of British triumphalism in visual methodologies during this time period as it shows a clear British victory against this cultural unknown. The general reception of this image by the British public was positive and similar to Ryne etchings would have garnered support for the continued expansion of the empire if it was portrayed as this easy to do so. While the painter was later criticized due to this perspective of ease and almost righteousness that the British possessed in this portrait, (Hanson) the message at the time would have been useful to continue and promote confidence in the British East India Company. 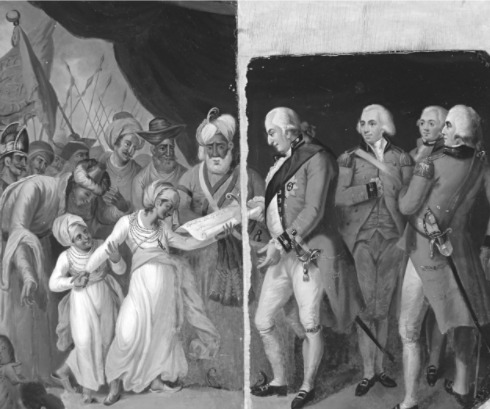 This painting again shows the same scene but in a more subdued light by Mather Brown a portrait and historical painter, born in Boston, Massachusetts, but active in England. It differs from Home’s painting by emphasizing more on the expression and look of the figures in it. Looking closely the faces of the Tipu people are in complete contrast to the smiling faces of the British, this not only hammers home the principle of British triumphalism (Hanson) but also creates a stark contrast between them. This contrast serves a sense of tension forged through the contrasting expressions, highlighting the double nature of the hostages' significance when they are caught. Brown comments on such imbalance of power and shows the humiliation of the defeated by their expressions. The cruelty of this kind bore almost no thought to the British public and many determined it to be a joyful display of Anglo-Mysore unity in India (Orme). This brutal treatment was therefore characterized as benevolent and kind compared to the actual prisoner experience in India at that time and contributed to the British feeling that hostages were part of peaceful resolution not violent acts of retribution.