The First Looks into Slavery on Cocoa Plantations in West Africa 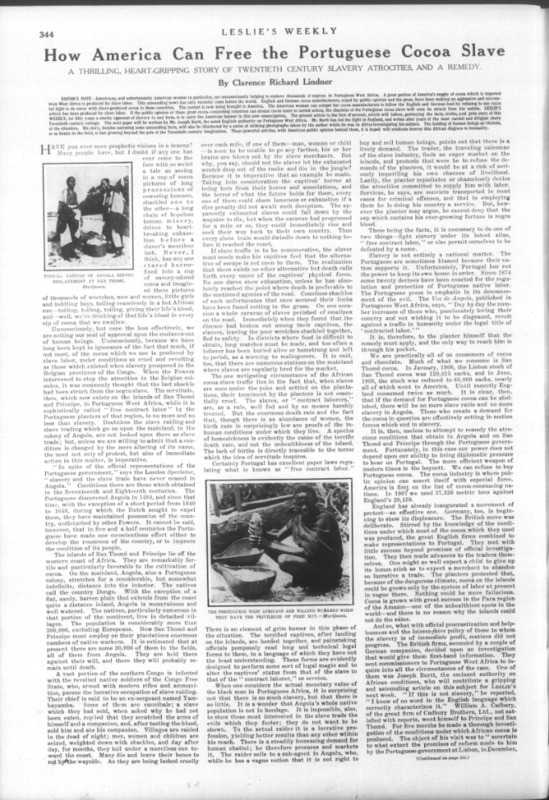 How America Can Free the Portuguese Cocoa Slave

In 1909, a series of four articles was published in Frank Leslie’s Weekly newspaper that exploited slavery on chocolate plantations in Portuguese colonies in West Africa. The first of these was published on October 7, 1909 by Clarence Richard Lidner. The aim of the article was to inform the American audience about slavery on chocolate plantations on the islands of San Thome and Principe, Portuguese colonies on the coast of West Africa. Additionally, the article aimed to inform the American public how they can end slavery on chocolate plantations, as the article is titled “How America Can Free the Portuguese Cocoa Slave”. Moreover, the article references William Cadbury and his efforts to work with the Portuguese governments to reform the labor force, announcing that “no adequate steps have yet been taken to remedy the evils proved to exist.” This helps to establish that chocolate companies were not making any meaningful change in eradicating slavery in the industry, since the article calls for the American public to take action, due to the lack of change. 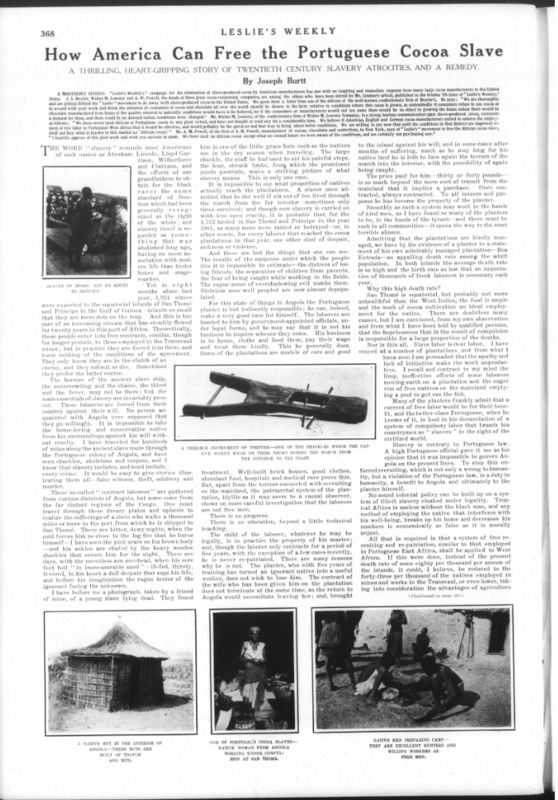 How America Can Free the Portuguese Cocoa Slave

The second article in the series was published a week later on October 14, 1909 by Joseph Burtt. Originally, Burtt conducted some of the first investigations of slave labor in the chocolate industry in West Africa. He was hired by William Cadbury in 1904 on an eighteen month contract to travel to Sao Tome, Principe, and Angola (colonies of Portugal at the time) to investigate the labor conditions (Higgs). This article comes two years after he published his report to the Cadbury company and Portuguese officials in 1907 (Satre). The purpose of this article is to explain to the American public about his findings of slavery in West Africa through his travels there and bring awareness to the issue. A series of pictures he took on his travels are also published with the article, helping to bring a human factor to what is going on. Burtt explains, “there is no progress. There is no education, beyond a little technical teaching” in reference to slavery in West Africa. Additionally, Burtt uses American nationalism calling on the American public to take action “in memory of [Abraham Lincoln], and raise [their] voice on behalf of the freedom for the colored races” once again. These two quotes also point to the lack of response from people in control (chocolate companies and the government) in solving the problem, as the public is being called on to elicit change. 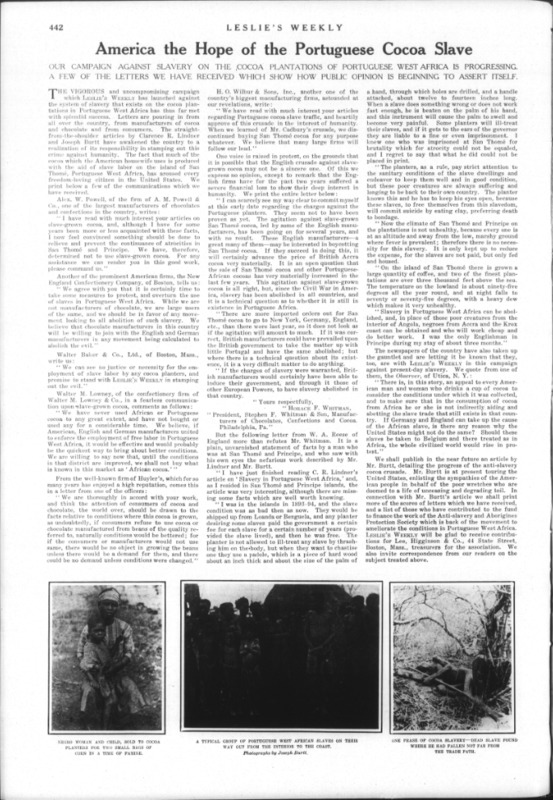 America the Hope of the Portuguese Cocoa Slave

The third article in this series was published on November 4, 1909. This article focused on the responses of the previous two articles Frank Leslie’s Weekly published. It features communications they have received from cocoa manufacturers and consumers. One of the responses was from Alex W. Powell from A.M Powell & Co, one of the largest manufacturers of chocolates and confections in chocolate admits he had been “for some years more or less acquainted with these facts” but now after the publication of the articles thinks something should be done about the atrocities in West Africa. The responses from the other chocolate and confectionery companies cited in the article have a similar point of view. This helps to conclude that chocolate companies have no will to create change in the industry, unless they are pressured to do so. 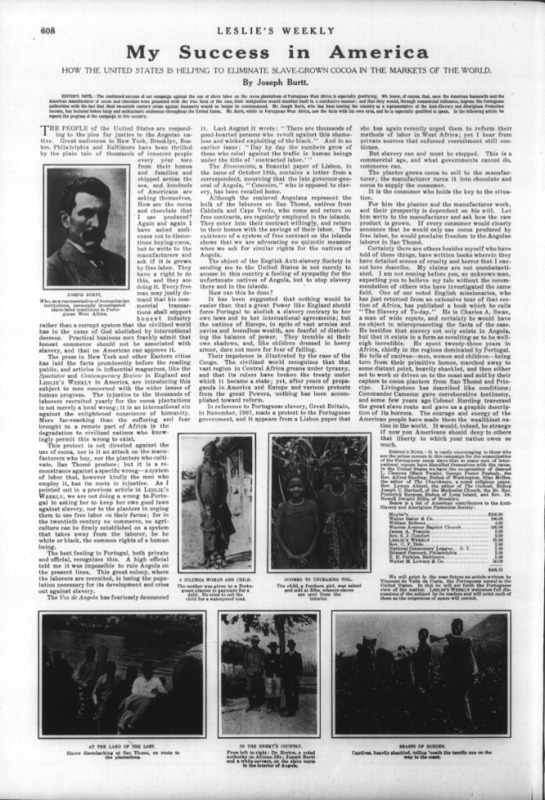 My Success in America

Finally, the last article published was on December 16, 1909 by Joseph Burtt. This article continues to illustrate the abuses of the chocolate industry through both images Joseph Burtt had taken on his trip to the area and his eyewitness accounts. Moreover, this article examines the failure of governments, mainly the Portuguese, in taking actions to prevent these atrocities. Burtt explains “What governments cannot do, commerce can…It is the consumer who holds the key to the situation.” Through this claim, Burtt is arguing that if there is no demand for slave produced chocolate then companies will be forced to make changes to the labor that is employed in chocolate plantations. Therefore, in order to create change pressure must be placed upon the chocolate companies for them to make changes in their supply chain and eradicate slavery and child labor. The series of the four articles helps to describe the injustice in West Africa in terms of cocoa plantations and create awareness for the issue to the American public. The fact that Frank Leslie’s Weekly printed several articles on the issues highlights the significance of the problem and the need for change. These articles are meant to persuade the American audience, so they could show bias in presenting the eyewitness accounts and photos from the worst-case scenarios. However, these injustices were witnessed, so regardless change would be needed. Additionally, it provides context that the government and chocolate companies were aware of the issue and did not do very much to alleviate slavery on cocoa plantations. This suggests their lack of urgency and willingness to create change within the industry.