The Dark Side of Chocolate

The documentary “The Dark Side of Chocolate” published in 2010, investigates child labor and slavery in Ivory Coast. It begins in Mali where many of the kids are trafficked through bus stations into the Ivory Coast. It explains how many of the children are tricked into going in hopes of making money, when in actuality they make less than a dollar or no money at all a day. To get the footage, the people filming the video utilize activists in the area to use hidden cameras. This helps to expose what is going on in the industry and the child and forced labor that is currently happening. Furthermore, the journalists go to Abidjan, Ivory Coast where Nestle, Cargill, ADM, and Barry Callebaut have head offices. These companies are responsible for purchasing nearly all of the chocolate produced in West Africa. Each of these companies all declined interviews for the documentary and issued a joint statement saying that they do not own the plantations, so they can’t be held responsible for what happens on them. Through stating these facts, the documentary argues that the companies are complicit with what is going on but are looking the other way and not making any changes. Later on, in the documentary the journalists are asked to have a meeting with the President of Ivory Coast’s right-hand man, who is in charge of the protection of child labor in the Ivory coast, since they heard about their investigations. In the meeting he explains that if you see children coming into the Ivory Coast in July through September, it is not for cocoa because that is not the season of the harvest, they are coming for “vacation”. The journalists then question that they witnessed the crossings in April. He responds by saying that “it is a problem then and they would take care of it” contradicting his statement earlier in the interview that child labor “is not a problem” in the Ivory Coast. This suggests that the government is complicit, like the companies, and are not doing much about the problem. The documentary also explains the supply chains of cocoa which helps to illuminate the underlying issues that perpetrate the cycle. Cocoa plantations sell their beans to intermediaries for around 1 euro per kilo. The intermediaries then wash and pack the beans and sell them to an international exporter for around 2.5 euros per kilo. It is then sold to different companies that produce cocoa powder or cocoa butter, which is then transformed into many different products. About one kilo of cocoa beans produces 40 chocolate bars. The supply chain shows the disproportionate distribution of wealth; the farmers do not make a livable wage. Their extreme poverty forces them to rely on forced child labor, which continues the cycle. Finally, at the end of the documentary, the journalists go to the International Labor Organization (ILO) to show them the footage they had collected. The speaker for the ILO admits that little real change has happened. This documentary's purpose is to expose the chocolate industry and the child labor happening on plantations. This means that they are not going to show any plantations that have made progress and do not utilize these forms of labor. However, this documentary highlights the opinions from a wide variety of angles. This helps to capture that even by 2010, the chocolate industry has remained largely the same, with little efforts to pursue change. The bottom two pictures are still images that were captured while creating the documentary. These images show underage workers in cocoa plantations and the dangerous work that they do. Although these images may be posed, these boys still work on the plantations and highlight that child labor is still in effect despite the Harkin Engel Protocol and other efforts made by chocolate companies. The documentary and the pictures help to point out that the effort to reduce and eradicate child labor on cocoa plantations is limited. Additionally, the chocolate companies and Ivory Coast government are turning a blind eye to the problem. 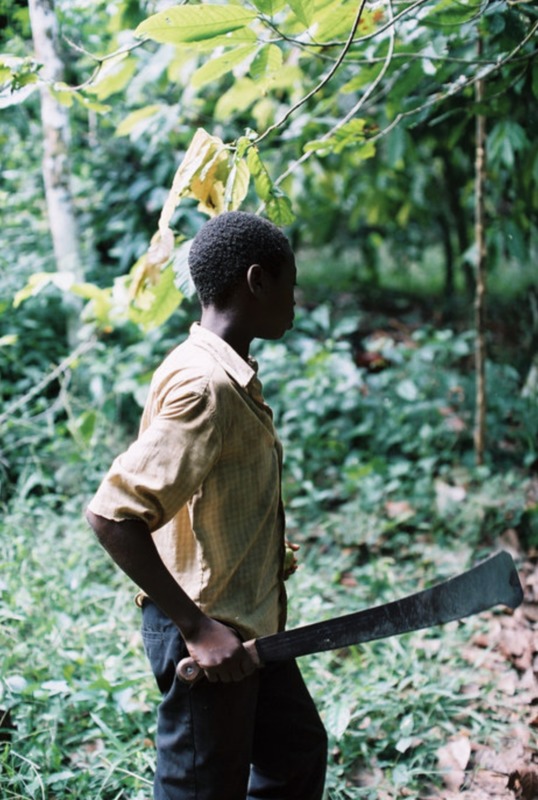 Mousso Ouedrago (age 13) holds a machete while working on a cocoa plantation in Soubré, Côte d'Ivoire 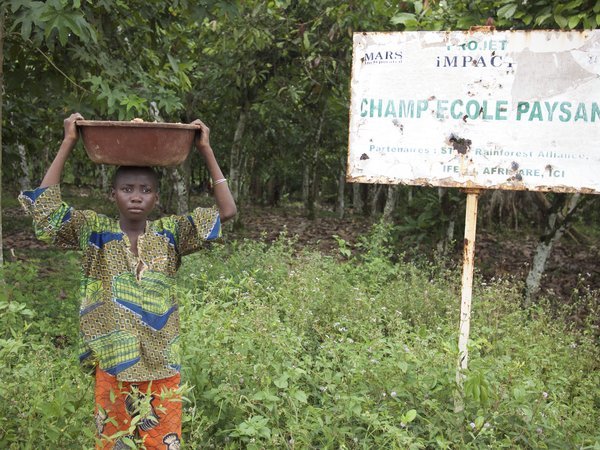