Illustrations and Photography: The Meanings of Mediums

By the 19th century, Brazil’s economy relied heavily on revenue from coffee production, providing over 50% of the export revenue and almost half of global production (Baronov). Within this time period, Brazil experienced two major export booms, first on the East coast from Paraiba to São Paulo from the 1830s to 1880s (Baronov) and then West of São Paulo from the 1880s to the early 1900s (Baronov). This exhibit displays both photographs and illustrations that depict labor on Brazilian farms (fazendas). Given that the first photographs of Brazil were not published until Victor Frond’s explorative photography project in 1861 (Segala & Garchet), analyzing various mediums of visual sources from this century can reveal similarities and differences in the portrayals of labor. When the speed of production, circulation, and reproduction capabilities of images increased with the use of photography, it changed both the depictions themselves as well as impacting the number and category of people who were able to consume the images within Brazil and around the world. These impacts will be expanded on in the section about intended audience. Finally, technological advancements in coffee production also occurred when the photographs were produced. In some instances, there are movements towards emphasizing industrialization of coffee production and exportation because it was at the time of a major export boom (Baronov).

Though illustrations and photographs differ in many ways, there are also a variety of common themes within visual sources from 19th-century fazendas. Many of the primary sources in this exhibit (and in larger collections such as the Instituto Moreira Salles) show groups of workers - most often people of color - on farms or ports, two significant spaces in the production and transportation of coffee. As a result, these depictions have become iconographic because the same themes are repeated by multiple artists across the 1800s and portray symbolic aspects of the supposed ‘truth’ of the lives of coffee plantation workers. More often than not, the human subjects are either working, their attention on the given task, or they are posed in a large group setting with their coffee production supplies. Throughout the exhibit, we will analyze our primary sources with the creator and intended audience in mind, based on Van Leeuwen’s theory of iconographic analysis of symbolism in images (Van Leeuwen). 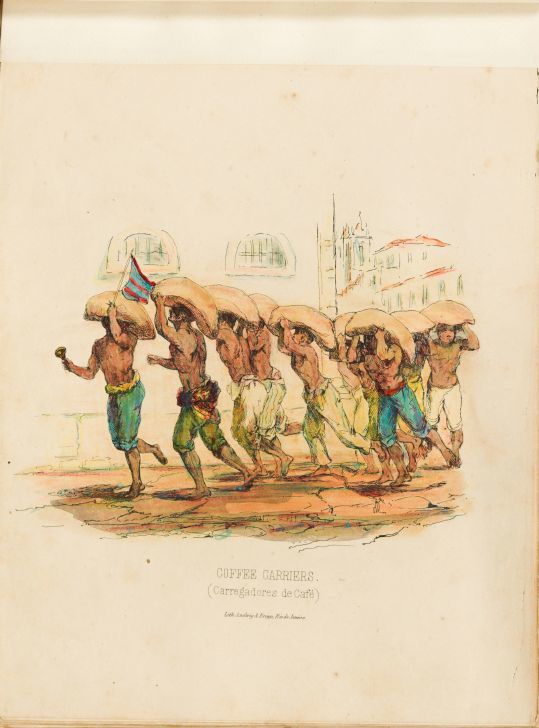 One such symbol appears in “Carregadores de cafe” [Coffee Carriers]. This watercolor image, dated between 1846 and 1849, was painted by German artist Eduard Hildebrandt and engraved by Pedro Ludwig, a Brazilian lithographer who made an entire collection of images that portrayed slaves in their daily lives (working, mainly), among other things.

“Carregadores de cafe” depicts a group of black men who are running through the streets of Rio de Janeiro with coffee bags on their heads. The men are likely slaves, given that the portrait was created well before the 1888 abolishment of slavery. Most of their faces are covered by the coffee bags or have no distinguishable emotions - they are portrayed more as a group than as individuals. This contributes to the dehumanization of laborers which, at the time, enabled their exploitation. Furthermore, their identity as laborers is the most noticeable aspect of the image, rather than them as individuals. This is shown through their lack of defining features as well as through the illustration’s title that describes them as coffee carriers, rather than ‘Brazilians,’ ‘workers,’ or other attributes.

Many sources depict coffee bag carrying in a similar fashion, suggesting that the coffee carriers played a significant role in the transportation process. Pictured below are two photographs which also include coffee carriers similarly. The left is a scene from a coffee plantation in which workers on the right of the image carry large bags of coffee beans away under the supervision of two well-dressed, light-skinned men. The right image depicts a loading dock in the port city of Santos. Both images will be analyzed in more detail in subsequent sections. 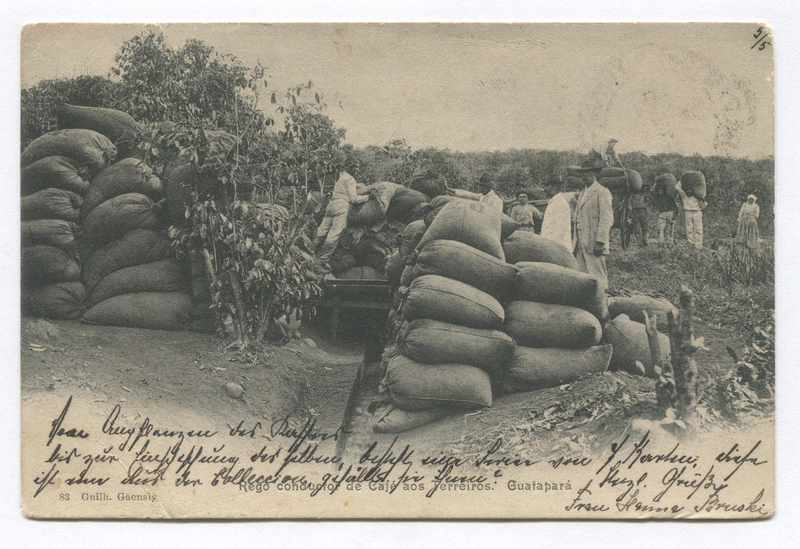 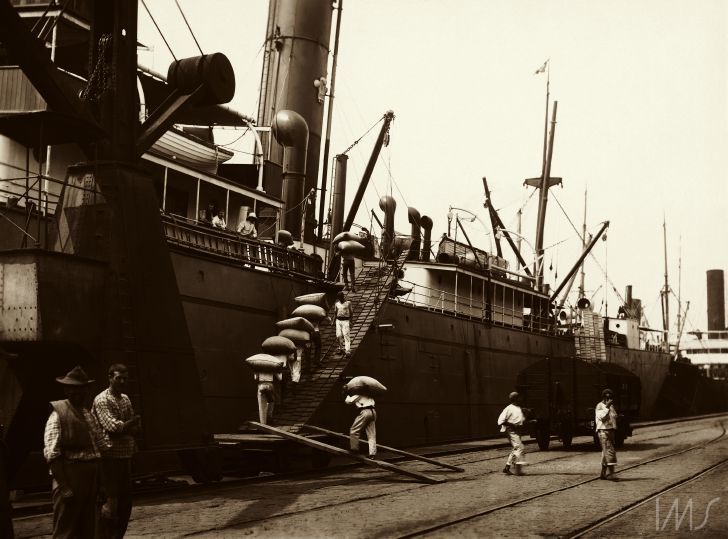