The Righteous and Benevolent Empire 情け深い正義ある帝国 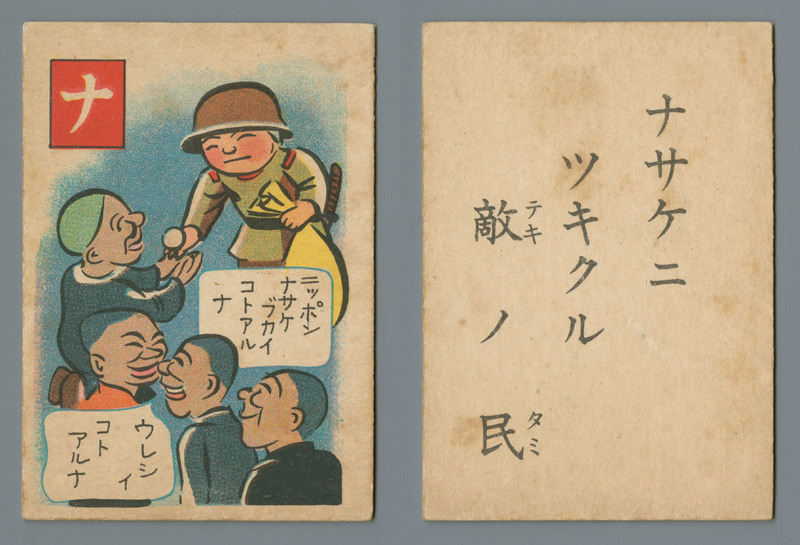 A project seemingly shared by all the iroha karuta authors and editors seems to have been defining and legitimating Japan's imperial territory and role.  Here we have three examples of cards that attempt to delinenate the boundaries and character of the Empire in differing ways.

In the first card, we see a Japanese soldier, with rosy cheeks and the suggestion of a smile on his face passing out rice balls to a line of waiting Chinese subjects.  The poem reads:

Overwhelmed by
kindness,
the subjects of the enemy.

The waiting 'enemies' say "The Japanese are truly deeply caring people aren't they?" and, "Yes, it's a happy thing, isn't it?"

A reader would be left with the impression, from this card, that soldiers engaged in humanitarian relief efforts, and perhaps even attracted the support of their subjects, who held the opinon that it was a happy thing to be colonized. 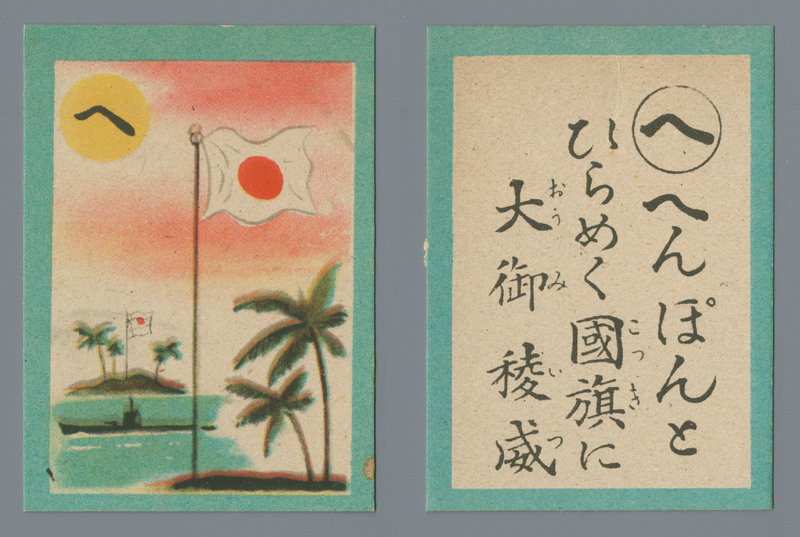 The second card is a depiction of the Empire that, while subtle, suggests that the colonies were cheerful about the domination.  It reads:

Waving cheerily,
the fluttering flag
to His Glorious Majesty!

The text offers no indication that this flag flies over the colonial territories.  The image on the grabbing card, though, does.  Palm trees are not native to most of the original Japanese pre-colonial territory, and came to be a signal or symbol of the islands in the South Pacific that Japan colonized, including Papua New Guinea, Indonesia and others. Throughout, images with palm trees should be examined for the subtext of colonization being represented.

Here, we are to believe that in the colonies, even the flags salute back to the Emperor, glad for the task. 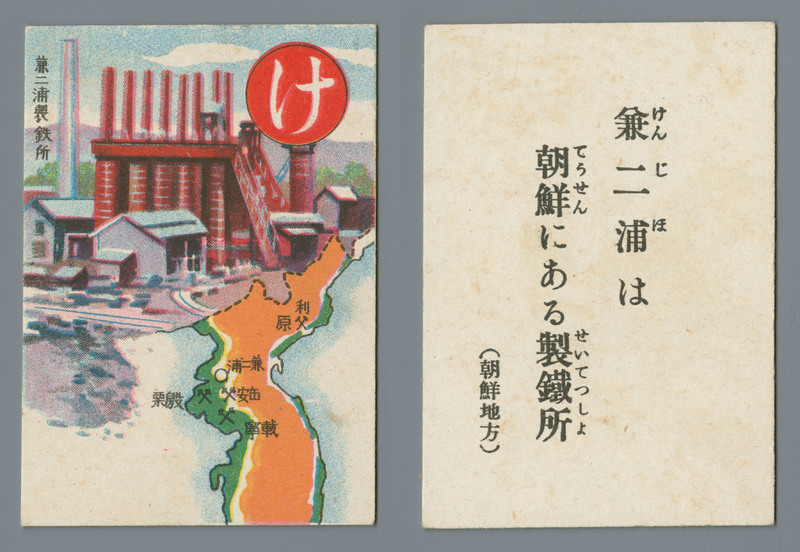 The third card, from the Japanese Geography set is the most brazen.  A small number of the cards, as well as the box top of the set, show the territories of Japan on the maps as the same color (red, like the red Japanese flag) as Japan, offering a visual grouping of territories that legitimates the annexation of these places and would teach children to consider these to be as much a part of Japan as the four main islands as we think of Japan today.

This card, showing the entirety of the Korean Penninsula, reads:

Kenjiho is the place in Korea where there is an ironworks.

This foundry, in the Songnim region of what is now North Korea, was included in the Japanese geography set.  The same publisher also made the foreign country geography set, so the choice to include these colonies as 'Japanese' should be considered intentional and an attempt at teaching children to consider these places 'Japanese'.