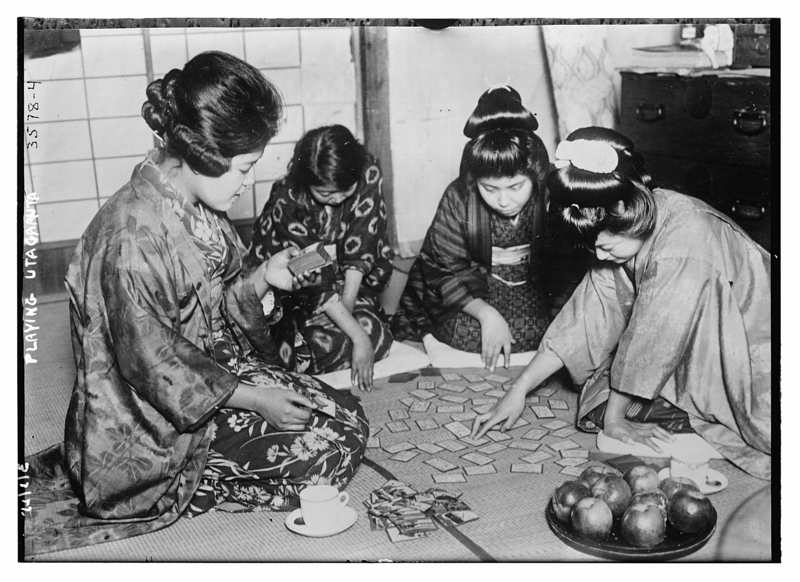 In contemporary Japan, most know karuta as a card matching game, often played around the New Year.  The most common form of karuta is based on a set of one hundred classical tanka poems known as the Ogura Hyakunin Isshu, anthologized in 1235.

In this version of karuta, typically, 2 players spread half of the 100 torifuda, or 'grabbing cards', out on the floor in front of them.  A third person acts as a reciter of poems and will shuffle a set of 100 yomifuda - 'reading cards' - select the top card and then recite the poem on it from start to finish. The two players will then try to find the grabbing card that matches the card being read aloud. However, since the reciter has 100 cards, and there are only 50 cards in play on the floor, sometimes the poem cannot be grabbed.  In this case, the poem is read to the end, and a new one recited.

Tanka have 5 lines: the first lines consists of 5 syllables, the second has 7 syllables, the third line has 5 syllables and the last two lines have 7 syllables each.  In hyakunin isshu, the cards on the floor in front of players contain only the last two stanzas of the tanka poem.  Skilled players will memorize each poem, and can pick the last two stanzas of the poem by hearing the first stanza read aloud.  The winner is decided when one player is rid of all the cards they started with, and any cards passed to them through various rules about fouls. 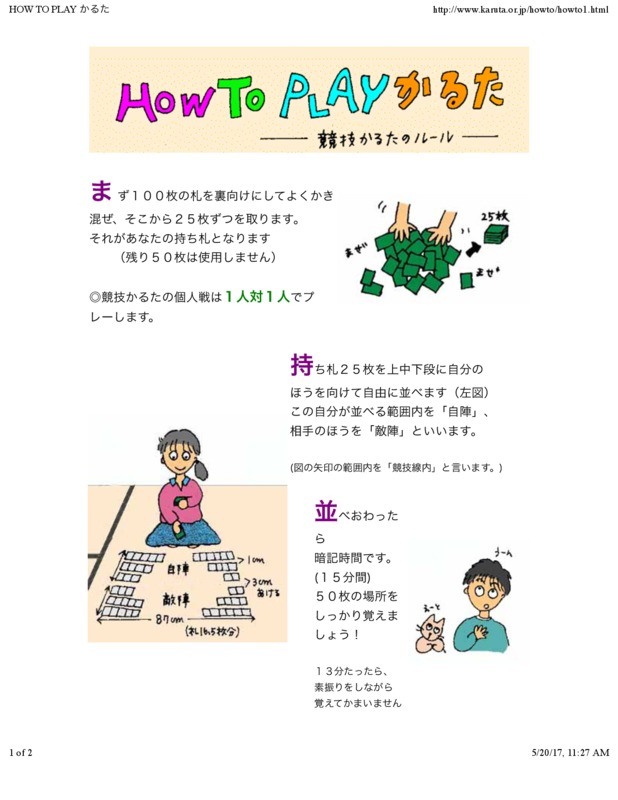 These instructions from the Japan Karuta Association walk a player through how to set up a competitve karuta game.

From this point on, the game begins.  A reciter will select a card and read it aloud.  If it is on the floor between the two players, one will grab or swipe it from the other. If the poem being read is not in play, the players will sit and wait for the next poem.

Iroha karuta is played with fewer explicit rules.  Usually, all 47 or 48 grabbing cards will be spread out on the floor between two or more players.  Cards are usually spread out in a messy circle between the group of players.  A reciter will still read the slogan or saying written on the recitation card, but fouls are not usually assessed.  The player with the most cards after all cards have been read and grabbed is the winner.  This is commonly played in preschool and elementary school settings with large classrooms of children split into groups of 4-8 students.