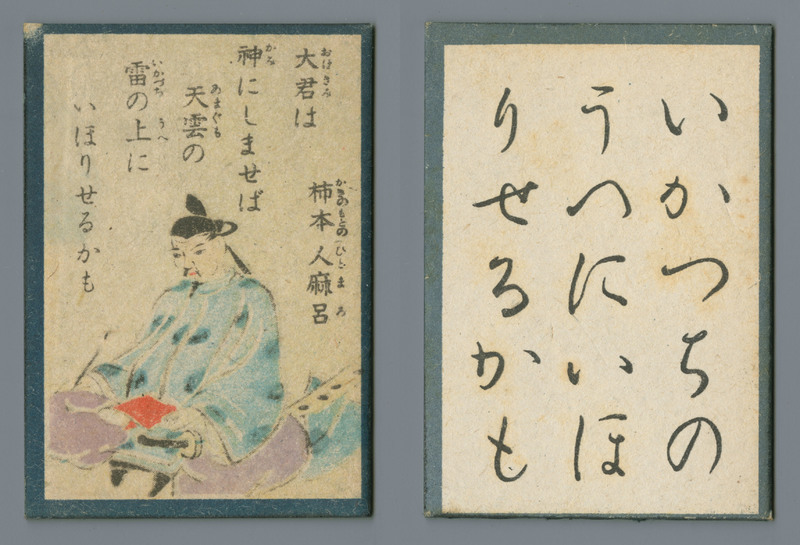 One of 100 patriotic poems

The history of karuta is said to go back to the mid-16th century, when Portuguese traders introduced their stiff paper playing cards known as carta to Japan.  The word carta, then assigned kanji characters (歌留多, 加留多 or 骨牌) and called karuta, were then produced in Japan with Japanese motifs (MPCHMM).  A 1992 publication edited by Hamada Nobuyoshi notes the first known documentation of karuta is the mention of a poetry card publishing house located in Kyoto in 1685 (Hamada 3). 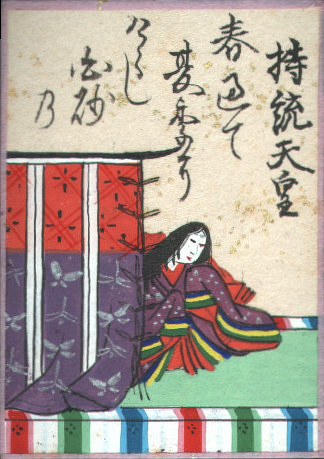 Two main types of karuta have developed since the 16th century: the Hyakunin isshu poetry cards, and the iroha proverb cards.

The hyakunin isshu cards are a set of 200 rectangular cards, forming a set of 100 card pairs.  Each pair has a 'recitation card' (yomifuda) and a 'grabbing card' (torifuda).  The recitation card contains the full text of a 31 syllable poem and the name of the poet.  The grabbing card has only the bottom two stanzas of the poem, and is laid out on a surface in front of the players.

In 1942, the Cabinet Information Board supported the Japan Literary and Patriotic Society assembling a new set of one hundred poems "with the purpose of uplifting the patriotic spirit during wartime" (Ibid. 2).  These poem cards, a transcription of accompanied by a 1944 translation by Honda Heihachiro, can be found in the 100 Patriotic Poems Collection on this site. 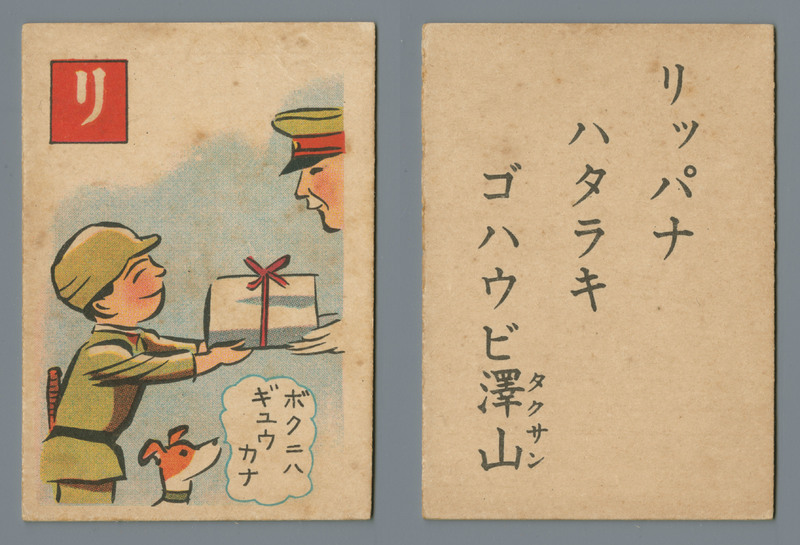 An example of an iroha type karuta card

The second type of karuta card is the iroha karuta card, thought to originate "in Kyoto in Kaiei Era(1848-1854) [sic], during the final years of the Shogunate, later being transmitted to Edo" (Ibid.). Iroha cards have been found to differ slightly because of regional differences between Western and Eastern Japan in proverbs and grammar (Ibid.).

The iroha version of the game is limited to 47 or 48 playing card pairs (grabbing and recitation cards).  Like the hyakunin isshu cards, one of each pair contains a phrase to be read alound, while the other half has a picture and a letter of the Japanese phonetic alphabet.  Each recitation card has a proverb or phrase that begins with a letter of the phonetic alphabet.