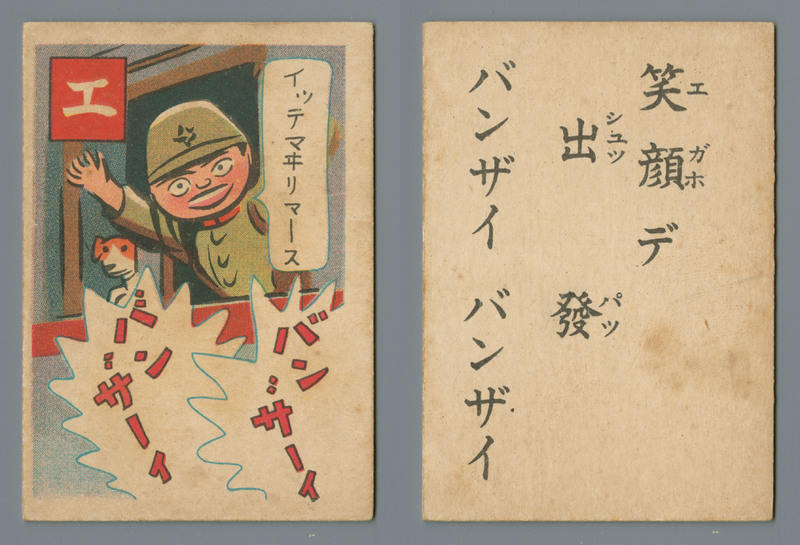 To display the first example of idealized images of Japanese, this is a scene in which Tecchan is waving at patriotic Japanese citizens as he heads over to a war. His face is filled with confidence to defeat the Chinese, and the citizens are sending the soldiers off with an exclamation wishing for Japan’s victory.

This card reads "Smiling at departure, banzai, banzai!" And Teccahn responds to the civvilians, "I'm leaving!"

Tecchan here has more pleasant looking than the Chinese soldiers depicted in other cards in the collection; he has symmetrical facial features, confident expression, and rosy cheeks. He is also with Chibiko (the dog), whcih makes this scene of sodlier leaving to the battlefield seem a less big deal and nothing cruel. 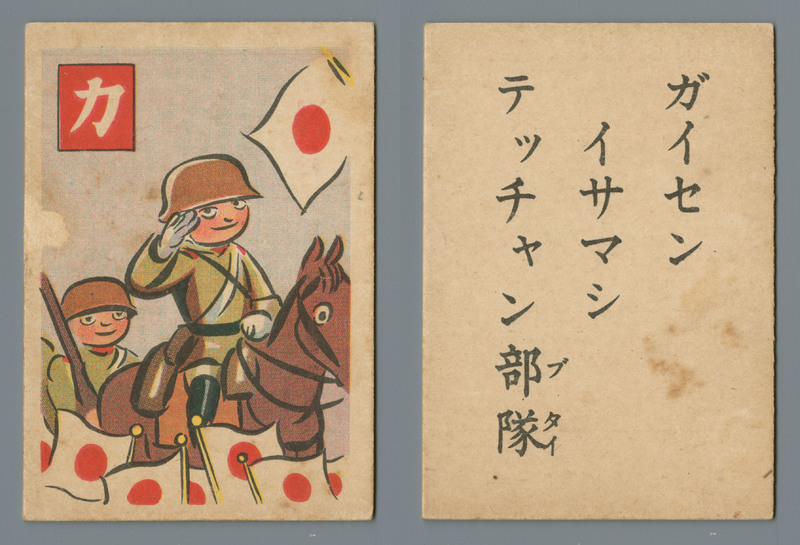 Here is another card that depicts interactions between Japanese soldiers and civilians.

This card reads "Courageous, in the foreign war, Tecchan's unit."

The Japanese soldiers are saluting as they presumably head over to the battlefield at the citizens who are cheering and waving the Japanese flags at them. As well as the previous card showing civilian's chant for the soldiers, this card conveys patriotism with many Japnese flags held up by the citizens, who are looking forward to Japanese military troops' success on the battlefield. 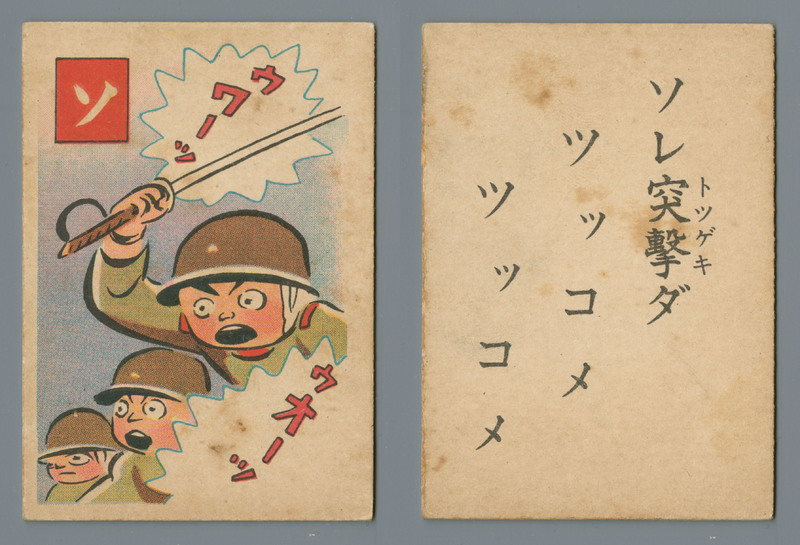 This card reads "It's time to attack! Onward! Onward!"

Japanese soldiers are thrusting into Chinese territory with swords as they roar. They are screaming in order to replenish themselves to fight. They look courageous and fearless, in contrast to the Chinese soldiers who were depicted as fearsome in other cards. 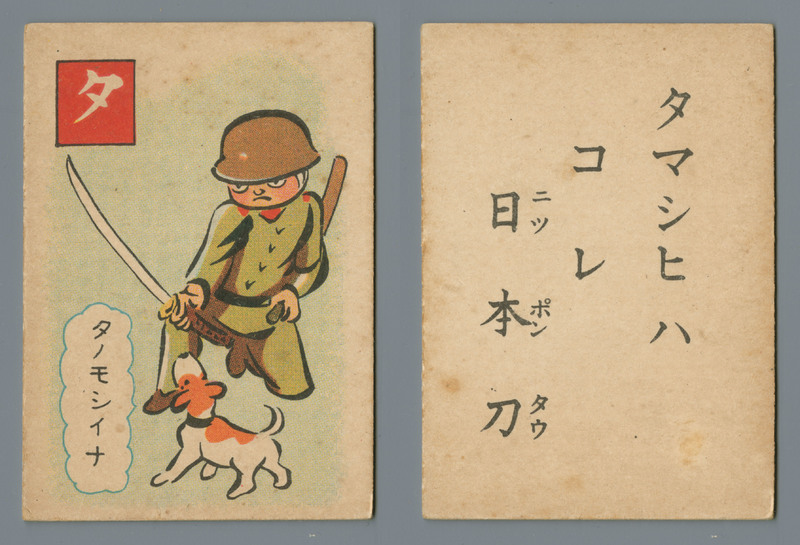 This card reads "My soul is this: the Japanese katana".

This indicates that his Japanese sword is synchronized with his own soul that it is very strong, tough, and reliable. Chibiko comments, "We can rely on him!" It provides the atmosphere in which he almost seems like a hero figure to the card players. 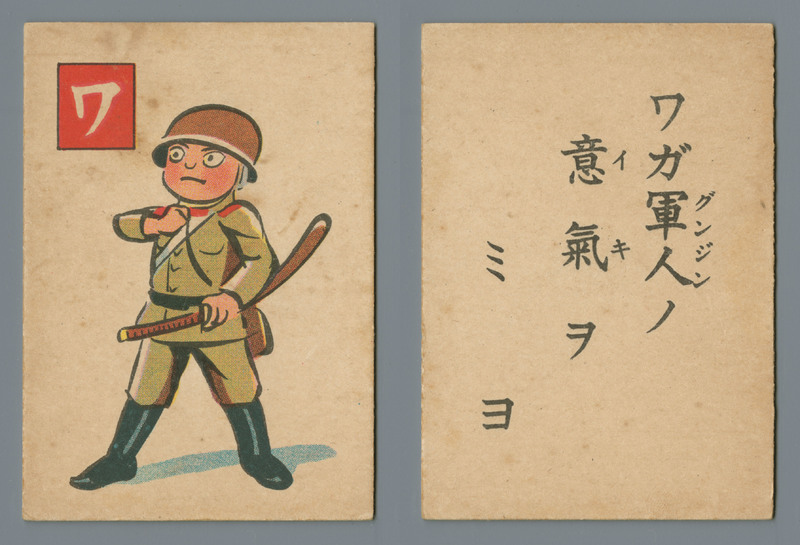 Similar to last two card above, this card shows heroism of a Japanese soldier, Tecchan, to appeal the military ocupation that passionately serves for the country. The card reads "Look at the spirit of our soldiers!"

Tecchan looks proud to serve for Japan; he puts his hand on his chest, straightens his back, and looks up in his military uniform.

According to the Karuta collection, Japanese soldiers are not only strong and tough, but also generous and sympathic to even enemy civilians.

This card reads "Overwhelmed by kindness, the subjects of the enemy."

Tecchan is distributing some food to Chinese citizens. The card conveys that the Chinese citizens are taking advantage of Tecchan’s mercy in a way. The Chinese civilians say, "Japanese people are compassionate and merciful", "Yeah, I am very blesed."

The point that this picture is trying to make is that Japanese soldiers treated Chinese subjects decently, as long as they are not at a battlefield fighting against Japanese soldiers. BUT maybe not (secondary source) 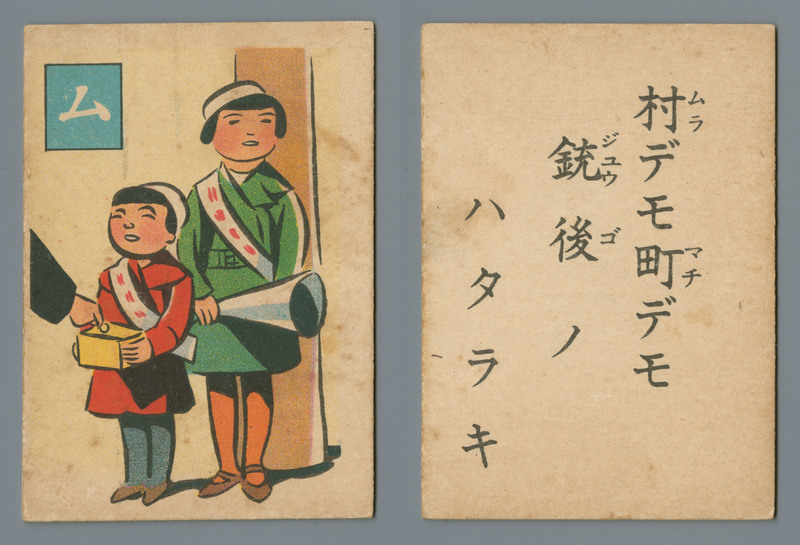 Meanwhile, this card depicts an idealized image of Japanese civilians behind the battlefield.

This card reads "In the villages and towns, the effort of the home front."

Two Japanese civilians are standing with a fundraising box to support their country financially and spiritually. The person passing by is putting a coin in the box to show the support. During the Pacific War Era, Japan was runing out of money and resources to spend for military purposes due to the prolonged war. Therefore, the federal goverment encouraged donations from civilians.

This card played a propagandistic role when it was publised; it showed an example of a way for a civillian to contribute for Japan's victory other than serving in the army. It had a purpose to teach the card players to work for their country, even if you are not at the battlefield. 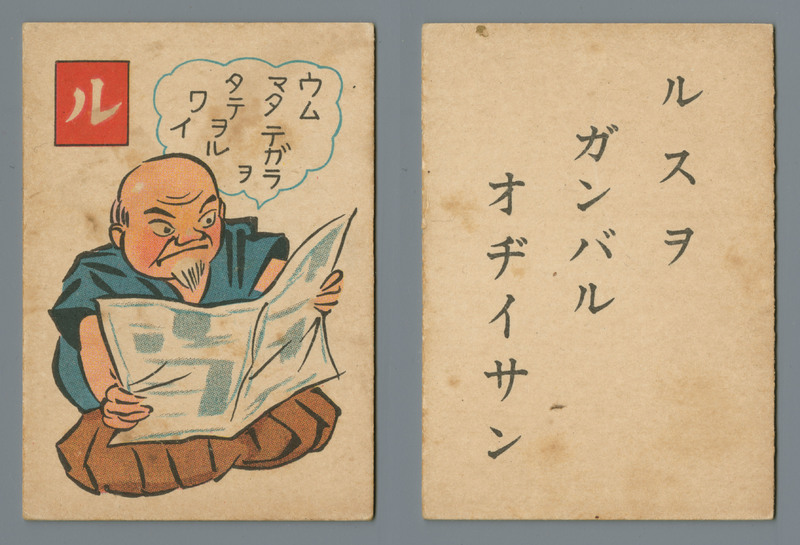 The card on the right reads "Doing his best, the old man takes care of the home".

An old Japanese citizen is reading a newspaper about the news of Japanese victory, saying "Wow, they have winned fame on the battlefield again." He seems very impressed and interested in how Japanese military is doing at the battlefield even though he is not physically fighting. It shows that citizens were spiritually with the soldiers, fighting against the Chinese, and were always willing to be updated. 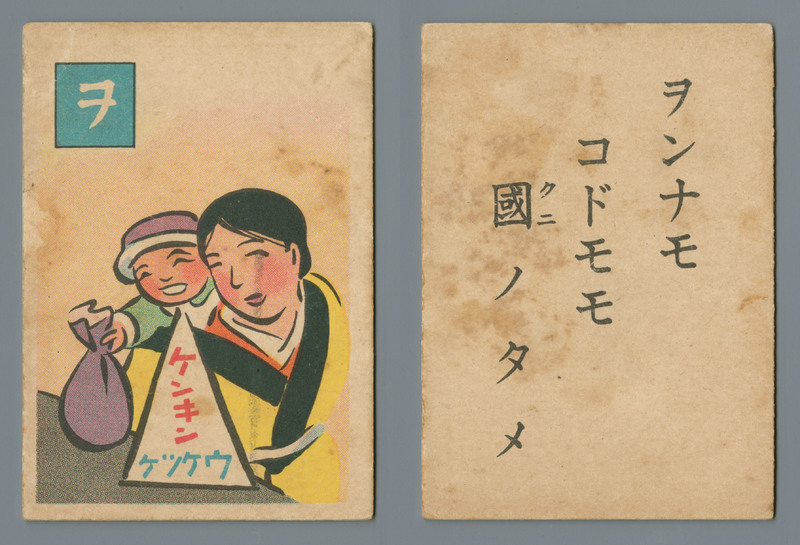 Here is another example of a card which emphasizes the good relationship between soldiers and civilians.

The card reads "Women, children, for the sake of the country".

It indicates that not only male soldiers, but also women and children who are not physically fighting at battlefields contribute to Japan’s victory by donating money and support financially. The picture describes a women with her baby handing a bag full of money at the donation reception desk. The cooperative attitude of the Japanese civilians encouraged the card players to consider to be more patriotic for Japan's victory.