In 1932, not too long ago from this Karuka card collection was published, Manchukuo declared independence from the rest of China with an intervention by Japan. A large groups of Japanese moved in and started controlling the indigenous Chinese in the area, while stating that Manchukuo was theoretically an independent state by having a Manchurian emperor. However, Manchukuo was practically a semicolony or puppet government, which was fully under the control of the Japanese who were in military and political executive positions. While Manchukuo was established this way, they created a national motto "Five Races Under One Union" (Japanese: 五族協和), which enhances the peace among the Japanese, the Manchus, the Han, the Koreans, and the Mongols. Based on this motto, the people living in Manchukuo started speaking a concord language, called "Kyowa-go" (Japanese: 協和語). Since it was hard for the indigenous Manchurian to communicate with the Japanese who moved in, Kyowa-go was made to be a combination of Japanese and Chinese with simplified grammars. Kyowa-go is often interpreted as a pidgin Japanese whcih is composed of abbreviated Japanese particles and terminations. 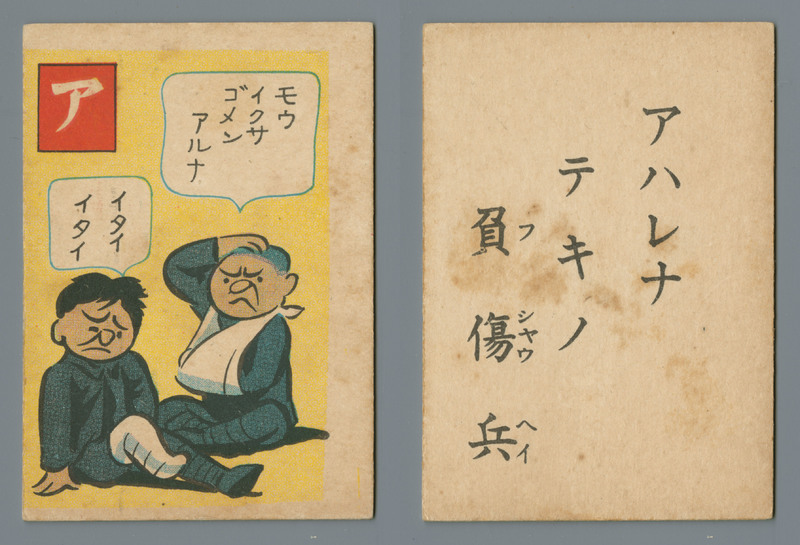 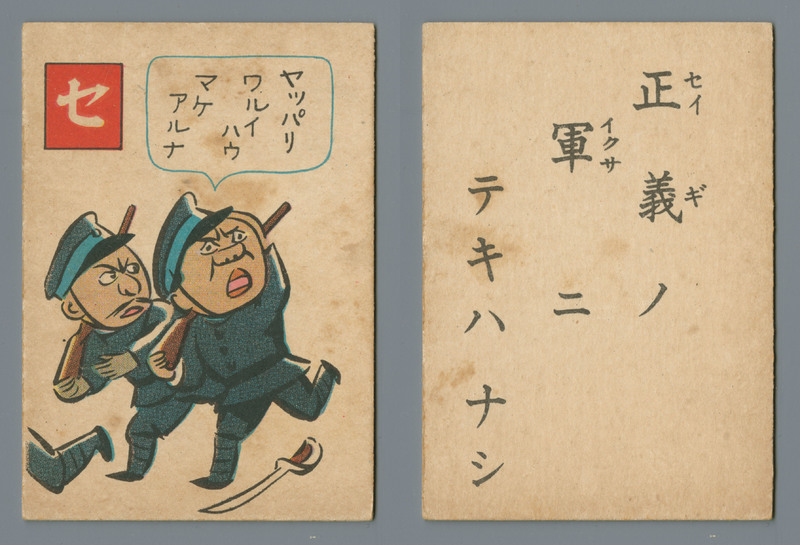 In the six Karuta cards shown, the Chinese soldiers are speaking in Kyowa-go. One of the well known represenstative examples of the grammar of Kyowa-go is uterlized in the first three (card 001, 014, and 020), which is "Aruyo" or "Aruna" endings. These endings are not part of Japanese grammar, but they are derived from Japanese. Since Japanese is considered to have complicated endings and terminal patterns, Kyowa-go was made to have extremely simplified endings such as "Aruyo (アルヨ)" and "Aruna (アルナ)" which can be put at the end of most of the sentences. 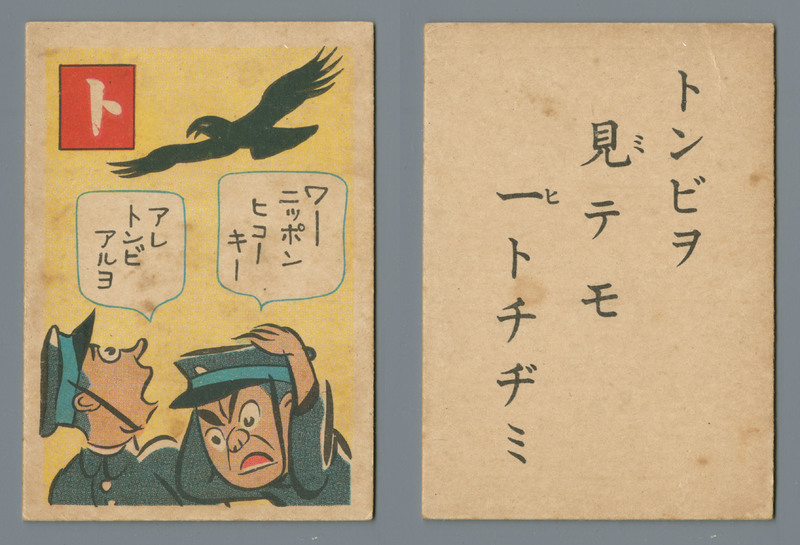 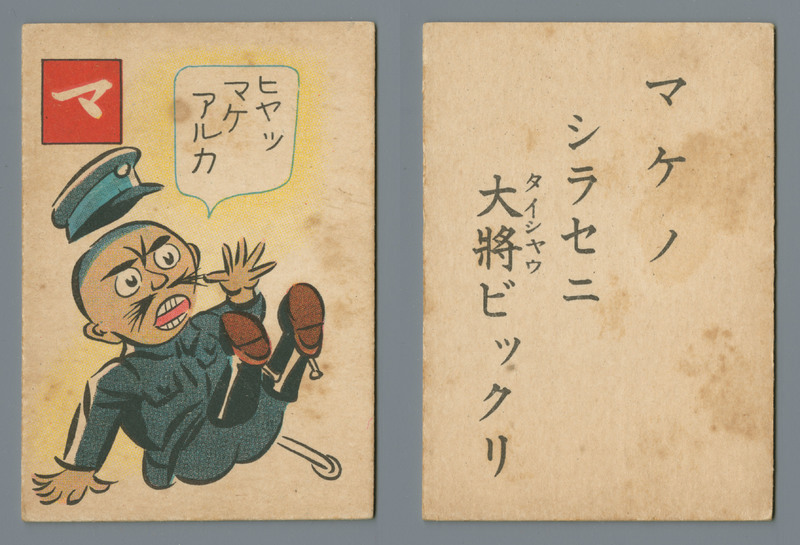 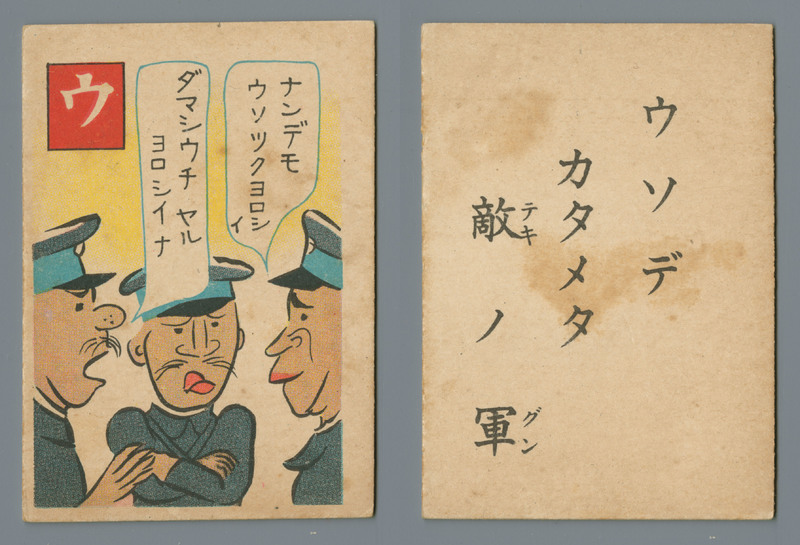 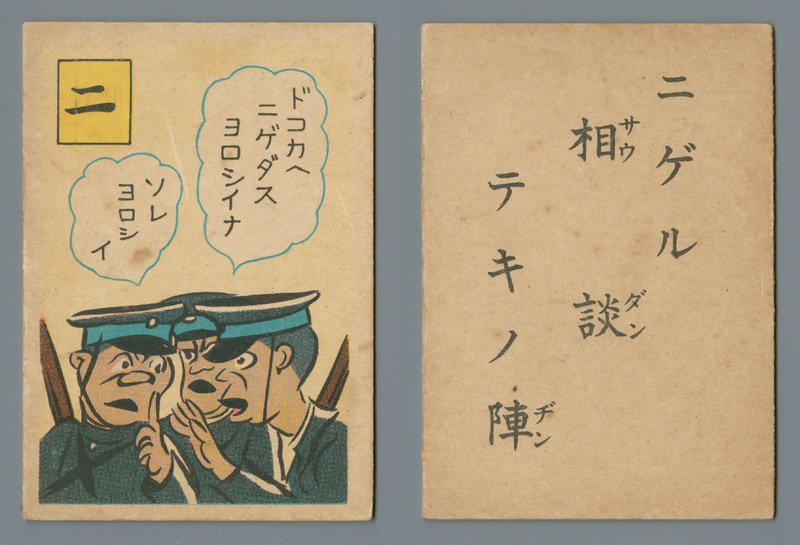 The other basic grammar in Kyowa-go is "Yoroshi (ヨロシ)" ending. This roughly means "can" or "it is good to". It was derived from a Japanese phrase "Yoroshii (よろしい)", meaning "it is good". Two examples are on the left (card 003 and 022).