The set was originally made for Japanese speakers, and as such, follows the old alphabetical order of 'I, ro, ha, ni.'  While each of these head letters matches up with the subject in the Japanese game card set, in English, it makes little sense, as 'Ha' pertains to getting a measles vaccination (no 'Ha' used in English).  In Japanese, 麻疹 hashika is measles, and the card begins with that word.

This card set is quite entertaining, as it introduces both public policies about which the average Japanese person should be aware, but also attempts to suggest subtle cultural shifts.  The first card, 「い」begins with a play on words: the ikumen and kajimen are two words that pull from other pieces of linguistic knowledge.

Ikumen is a word made up in the 2000s that mimics a real word, ikemen, which means handsome. In this word, 面 men refers to a face.  The new word, ikumen, changes this men to mean a male, borrowing from English, while subtly shifting ike to iku, which points to the kanji character 育 iku, part of 育児 ikuji, or childrearing.  This new word, playing off of an old word for handsome and desireable looks has shifted the focus of the woman's desire to a man who does childrearing and chores (kaji-men). 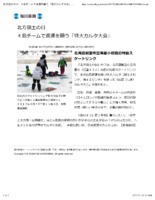 A contemporary manifestation of karuta with a nationalist bent is this set of poems about the four islands of the Kurils returned to Russia in the post-war period. During the winter of 2017, a karuta set extolling the beauty and virtues of the former Japanese territories was distributed to select schools on Hokkaido, the northernmost island in Japan.  The large format cards were spread out across a playing field and children ran atop the snow and ice to find the card being read.  The photo that accompanies the article shows children in snow suits, helmets and pads running toward the cards.

One card excerpted in the article reads: "I want to live in peace on the island like in the past."  A card visible in the photo of the cards to the right reads "I never stop believing, some day, in the return of the four islands."

Territory treatied away from Japan in the post Empire period has been the focus of revived cultural and political interest as Japan, China and Russia vie for as much territory in the seas (often rich in rare minerals, as well as convenient shipping routes) as they can.  Ambiguity of pre-colonial ownership and national boundaries has caused conflict as nation-states try to prove their territorial rights to islands and the 200 circumferenced miles of coastal rights that attend these territories. 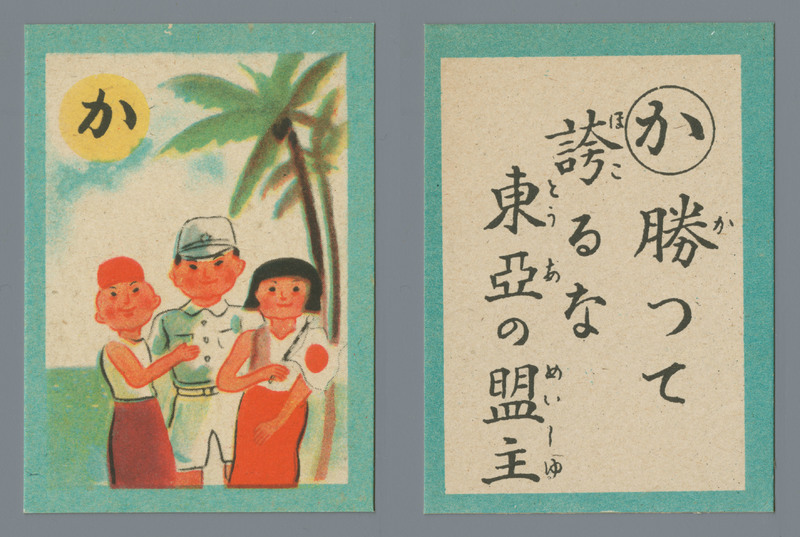 This card from the Asian Development Elementary Karuta Card set provides a 1943 foil to the Four Island Set above.  This card, for example, reads, 'Win! Feel pride! Leader of the confederacy'. In this case, the 'leader of the East Asian confederacy' is a reference Japan creating and leading the Greater East Asia Co-Prosperity Sphere (大東亜共栄圏), announced 29 June 1940 by the Japanese Foreign Minister via radio (De Bary 622).  The Sphere would legitimate the subsumtion of numerous nations and territories colonized and occupied by Japan (including South/east Asia and Oceania), and act as a unit of power in politics, advocating for 'East Asia' (Japan) on the world stage. The radio address in which this was announced stated it thus:

"Japan's ideal since founding the empire has been that all nations should be enabled to find their proper places in the world. Our foreign policy has also been based upon this ideal, from which we have not hesitated at times even to fight by staking our national existence...it seems to be a most rational step that peoples who are closely related with one another geographically, racially, culturally, and economically should first form a sphere of their own for coexistence and co-prosperity and establish peace and order within that sphere and, at the same time, secure a relationship of common existence and prosperity with other spheres...It is in this spirit that Japan is now engaged in the task of establishing a new order in East Asia." (Ibid.)

Four Island Karuta seems to echo the use of karuta in the Development Karuta Card set because both are used to suggest a norm of territorial loyalty and ownership that is not legitimate by the legal standard of the time in thich the cards circulate, and because the cards are used to encourage the interaction with and internalizing of these ideals by children too young to study the nuance of territorial disputes and the psychological maneuvers of nationalist rhetoric.

In the past decade, the Ogura hyakunin isshu form of karuta was also the subject of a series of manga published beginning in 2007 aimed at teen readers.  The story was adapted and released as an animated tv series and then as a movie in 2016.  The trailer for the movie, Chihayafuru, is available here with English subtitles.  Due to the popularity of this series, interest in competitive karuta has again been revived among young people in Japan.