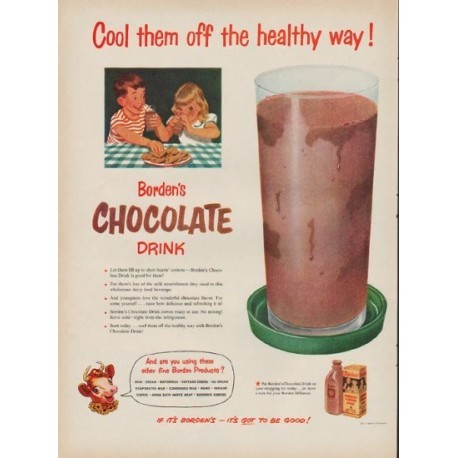 During the 1940s to the 1960s, a trend can be seen wherein chocolate companies tried to convince mothers to buy chocolate products as a healthy choice for their children. The chocolate in these advertisements was generally milk chocolate, in either a liquid or a solid form. This matches the social climate of the 1950s, where family was meant to be the central focus for women and their own autonomy was limited. As historian Katherine Parkin explains, throughout the twentieth century, “women have had sole responsibility for [food’s] purchase and preparation” and advertisements promoted the idea that “food conveyed their affections and fulfillment of duty to their families.” In this way a woman’s focus when purchasing food was on their children rather than herself. By providing her children healthy food, she showed her love for them. This Borden’s advertisement is an example of how advertisers in the mid-twentieth century promoted the healthiness of chocolate to women so that they could fulfill this social contract.

The ad promotes the supposed healthiness of the product, how it will “cool them off the healthy way.” Happy, healthy white children are shown enjoying the product with lots of playful pastels on the image. These images give off an impression of innocence and health, meant to pull in mothers that want to provide health and happiness for their families. Overall the advertisement seems to target white middle class mothers in a culture that has taught them that “food is love” (Parkin, 4). 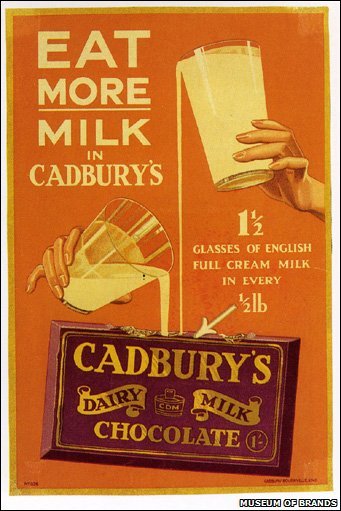 One way that chocolate was typically advertised as a health food during the mid-twentieth century was through dairy. Milk was often used in the 1950s and 1960s as a justification for the health of chocolate. Just as parents today encourage drinking milk for strong bones, chocolate was promoted as a healthy option because of its dairy content. “Big Dairy” has always been a powerful lobbying force, and despite having undesired high fat content and added sugar, milk was manipulated in the media to be viewed as healthy (Ferdman). Cadbury’s, in particular, started an emphasis on advertising the milk content of their chocolate bars as early as the 1920s (Cadbury.co).

Cadbury’s had a signature symbol starting in the early 1900’s called the “Glass and a Half” where a full glass and a half glass of milk are poured into the chocolate (Cadbury.co). In this particular image, by showing milk pouring into the chocolate bar, the advertisers try to equate the health of a glass of milk to the health of their product. Though this advertisement does not feature children, Cadbury’s choice to make consumers aware of its milk content illustrates the way in which milk was used to make chocolate seem like a healthy option during this time period. 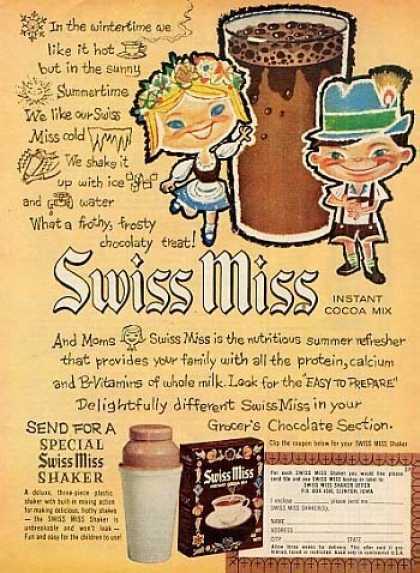 Cadbury’s was not the only company advertising the dairy content of their chocolate. Though Swiss Miss goes into less specifics, this advertisement from the mid-twentieth century makes sure to emphasize the “B-vitamins and whole milk” of its cocoa mix. The ad tries to convince the reader that cocoa is a “nutritious summer refresher.” Though cocoa may often be thought of as a winter drink to be had hot, Swiss Miss tries to sell a special shaker to promote its use in the summer as well. This technique of promoting cold chocolate drinks as a refresher after play or exercise will be revitalized in the twenty-first century for adults (Ferdman). In the mid-twentieth century, however, the drink is clearly promoted to women for the enjoyment of their children.

The advertisement from Swiss Miss features two white children, a boy and a girl, in a way that seems to almost belong in a fairy tale. The charming color scheme is full of pastels and gives an impression of innocence to the advertisement. This suggests white mothers to once again be the target of the advertisement. The woman drawn as a mom figure in the text of the ad appears white and likely blonde, in line with the typical ideal appearance of a thin white mother of the 1950s and 1960s. Through its images and its text, this Swiss Miss advertisement therefore appeals to white women with the idea that they will improve the healthiness of their children while also winning their affection and being the ideal mother of a picture-perfect family. Through advertising to women in this way, it can be seen that a woman’s priority was only with her family. As we move forward in the history of western countries like the United States, we can see an expansion of this idealized role in advertising.