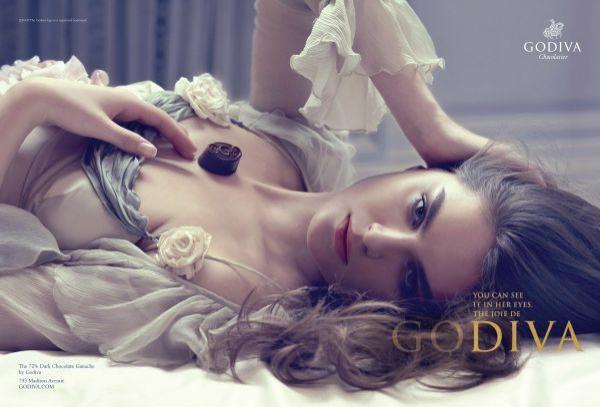 In particular, Godiva featured highly sexualized women in its 2004 advertising campaign. This Godiva ad reads “you can see it in her eyes; the joie de [Go]Diva,” and while this campaign intended to present the women as independent “Divas,” the woman here lying on her back with chocolate on her bosom is hinting at more than chocolate. Certainly her breasts do not need to be present to sell chocolate, but as Illouz points out, signs of gender and sex are often exaggerated in advertising to link consumption and eroticism (84-86). The woman in the ad looks directly at the audience, not at the chocolate, bringing the viewer into the picture. The colors are also dark and muted, more sensual than the bright gaudy hues in the earlier advertisements. This indicates a shift to an exclusively older audience (probably young women or older women, as opposed to teenage girls, who would have been included in the audience for the older, tamer and more colorful advertisements). While the ad campaign encouraged women to find their inner “diva,” and women are supposedly capable of self-fulfillment now, they are still sexualized in images (even in cases such as this one, where the advertising was in mostly women’s fashion magazines), and the modern woman’s insecurities about looks and desirability are still appealed to (Nutter 213). 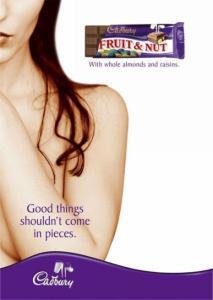 This Cadbury fruit and nut bar advertisement highlights some of the intersections of the use of eroticism and health in chocolate marketing. This advertisement features a naked woman (whose eyes are not seen, depersonalizing and objectifying her) next to a bar of fruit and nut chocolate, with the caption “good things shouldn’t come in pieces,” implying both that whole fruits and nuts are in this chocolate bar but also that in sexual “consumption” one may want a “whole” woman, all at once.  The audience of the advertisement is somewhat ambiguous (although certainly adults, and not children), but it could appeal not only to women (wanting to be that desired woman, which could perhaps be achieved through eating this healthier chocolate containing whole fruit and nuts), but also to anyone who may desire that woman sexually. Again, we find that even though women are capable of finding self-fulfillment, are not portrayed in relation to men, and can focus on their own health, they are still highly sexualized in advertisements, even those directed at the women themselves. The message is that part of self-fulfillment is the ability to better one’s self and become more desirable. While women’s desire to be sought after has always been used, it is perhaps more subtle in the present day, without being placed next to men in advertisements (Sivulka 49).