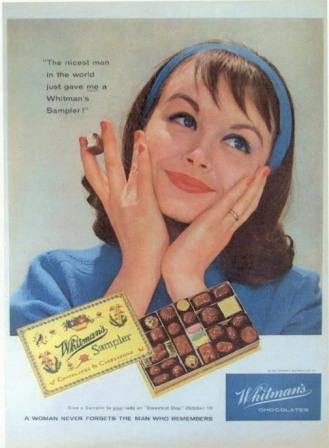 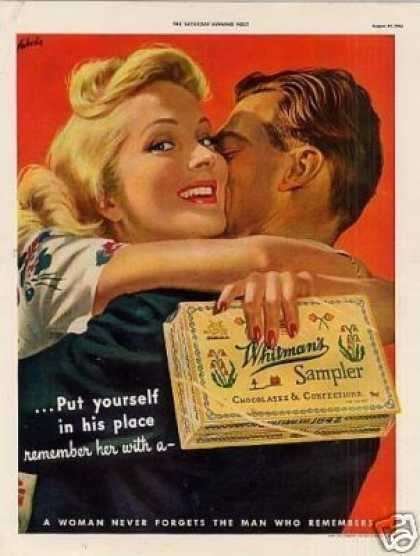 In the 1940s and 1950s, marketers manipulated women’s desire to be sought after by men, especially playing up flirtatiousness, teasing, and above all, romance (Sivulka 55). Chocolate has long been thought to be an aphrodisiac or even a fertility aid, and advertisers capitalized on this when encouraging consumption of chocolate by women (King 117-120). In this 1958 full-page magazine advertisement by the Whitman chocolate company, a happy-looking, youngish woman (wearing a wedding ring) eats chocolate, exclaiming, "the nicest man in the world just gave me a Whitman's Sampler!" We can infer that this “nicest man” is likely her husband. In this case, she is not necessarily encouraged to purchase chocolate for herself, but instead the ad suggests that she should encourage her husband or suitor to purchase it for her. The ad also links romance and pleasure, as was (and still is) common, even if the pleasure obtained in this case is chocolate (Illouz 36). We also see here, as will be clear in other ads, who the target audience is. Advertisers preyed on women’s insecurities (in this era, feeling the need to be in a relationship with a man, and be pretty enough to merit gifts) and considered women to be the ones who would do most of the consumption (especially middle-class white woman, as this audience probably was) (Parkin 8-12).

The older ad, from 1943, portrays an attractive young woman smiling and facing the audience, embracing a man, with the caption “put yourself in his place-remember her with a [Whitman’s Sampler].” While this ad is aimed more at men, the implication is still that the women want the chocolate, and also that chocolate could be useful in courtship (as this woman is not wearing a wedding ring). In terms of eroticism, these ads are quite demure, but focus heavily on romance aimed at all women (not just housewives). Illouz posits that ads portraying couples in this way are often reflective of societal values (34), and here the viewer wants to be like the women, and have a man who will buy her chocolate (Sivulka 51). This also reflected the tendencies of advertisers in this and earlier time periods to merely hint at marital status in ads for non-domestic products (Illouz 35), broadening their consumer base to include young people dating as this became more popular in the 50s and 60s (Nutter 210). 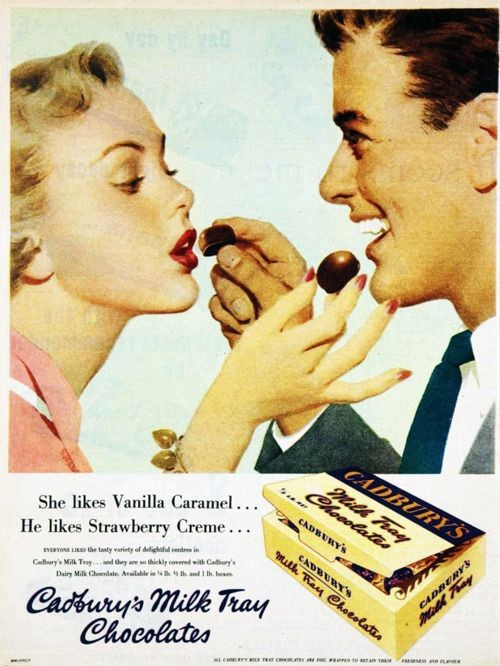 All three of these advertisements are also indicative of the commodification of romance reflected in western capitalist advertising fairly early in the twentieth century (Nutter 199). We see this especially with the following 1957 ad for Cadbury’s Milk Tray Chocolates. While Cadbury is a British company, the trends observed in US advertising still hold true, and the audiences are largely similar. This ad also features both a woman and a man, capitalizing on women’s desires to be with men, and is perhaps the most (mildly) erotic of the three (Sivulka 49). The woman and the man are smiling with open mouths, about to feed each other chocolates. She is clearly made up, and both are well dressed. Much is still left to the imagination—an effective advertising technique according to Sivulka— and no suggestion is made about their status relative to each other (51). The large caption reads “She likes Vanilla Caramel…He likes Strawberry Cream…” and one can’t help but notice that she is very fair and wearing pink, rather like strawberry cream. This is probably the strongest example in the older time period of linking erotic desire to products, and while this is much less explicit than a modern viewer might expect, eroticism in advertising has increased leading to the present day (Illouz 82, Sivulka 39). This advertisement is hinting at a preference for something other than chocolate.